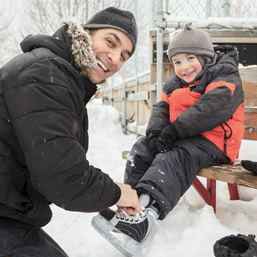 Read on for my list of free and budget friendly Calgary winter fun that you can do with the kids to get out of the house (stop hibernating!) and enjoy time as a family!

1. Tobogganing. Tobogganing is tons of fun, great exercise, and doesn’t cost a penny. The City of Calgary has 22 official toboggan hills, which are maintained and have a long clear area at the bottom of each hill. Popular tobogganing hills include Prairie Winds Park, Confederation Park, and Stanley Park. Remember, safety first! Helmets on heads while sledding.

2. Outdoor skating. Calgary has many free options for outdoor skating, including two (Bowness Park and Olympic Plaza) where you can also rent skates. Many communities also create their own rinks each winter. Outdoor rinks in Calgary typically start opening mid to late December, depending on the weather. Olympic Plaza has a refrigerated ice surface, so it opens earlier than other rinks (late November) and closes later (mid-March).

3. Cross-country skiing and snowshoeing. Although you need to have skis or snowshoes, there are groomed and un-groomed cross-country skiing paths that are free to access. Popular locations include South Glenmore Park, Shaganappi Point Golf Course, and Bowness Park.

4. Geocaching. Geocaching (using GPS to find hidden boxes) is a popular summer activity, but many caches are winter friendly (think ones hidden higher up, for example). Look for geocaches that people have previously been able to find during the winter months to improve your success. Happy hunting!

5. Outdoor Christmas light displays. The Lions Festival of Lights can be found along 14 Street on the west side of Confederation Park until January 8, 2022. This year, the light display will include three teepees built by Indigenous people.

And Spruce Meadows will once again be hosting a drive-thru Christmas light display on weekends from December 10, 2021, to January 2, 2022. Enjoy a huge display of giant lit Christmas trees from the comfort of your car!

6. Calgary Public Library. Library cards at the Calgary Public Library are free for everyone. They also offer many free programs and activities. Calgary Libraries have play areas called Early Learning Centres - some are small, but many, such as Fish Creek Library, have larger areas with games and toys for kids.

8. Devonian Gardens. Located in The CORE Shopping Centre downtown, along the CTrain line, the Devonian Gardens is a little oasis of green to enjoy year-round, but a great oasis to escape to with the kids during the white winter. In addition to the gardens, there is a playground (best for kids ages five and up) and koi fish.

10. Indoor skating. Indoor skating is also inexpensive. Most rinks have a family rate. Skating at The City of Calgary rinks is $11.45 for a family. Vivo (formally Cardel Place) has a special skating-only price of $15.

The Olympic Oval at the University of Calgary hosts Toonie skates on Monday nights from 6 to 8pm (some Monday exclusions apply; check the Olympic Oval’s website for the schedule). Skate on an indoor long track speed skating ice rink, also known as the fastest ice in the world! Even other public skating times are surprisingly affordable - a family can go for only $18.50!

11. Indoor swimming. Swimming is awesome in the winter as it can almost make you forget how cold it is outside. Calgary has a ton of different options for swimming, and they are all budget friendly. Admission to City of Calgary pools is $16.30 for a family.

Leisure centres, recreation centres, and YMCAs in the city also have drop-in admission for families that fall around $30. In addition to swimming, many of the rec and leisure centres also have other activities included with admission, like climbing walls and gymnasiums.

The Military Museums is dedicated to educating the public about Canada’s navy, army, and air force and is $30 for a family.

Bow Habitat Station has freshwater aquariums, as well as beautiful interactive exhibits that explore different ecosystems. Visiting the Bow Habitat Station’s Discovery Centre is $30 for a family (does not include a visit to the fish hatchery).

If one or more of these activities becomes a favorite winter activity, why not invite along some family friends next time? The more the merrier this time of year!

Dana searches out the best places to play, eat, and learn with her kids in Calgary, across Alberta, and beyond. Her three kids also contribute their unfiltered opinions to her reviews. To explore more, visit calgaryplaygroundreview.com.