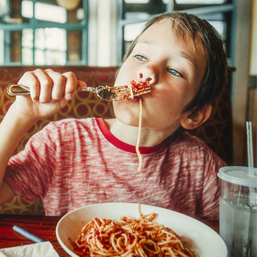 “David’s mom is fat. She needs to go on a diet.” When my sweet kindergartner innocently uttered this line after school one day, I couldn’t hide my shock. After experiencing my own body image ups and downs, I’d tried to protect my young kids from talking about weight loss and dieting. Faking composure, I countered with, “Oh? Um, where did you hear that?”

She explained, unfazed, “David’s mom said it herself. She was at school today and said to my teacher, ‘I’m fat and I need to go on a diet.’” “She said she doesn’t like her butt.” With a throwaway shrug, she skipped off to join her friends on the swing set. I was left swinging between anger that my five-year-old had been introduced, albeit accidentally, to the idea of dieting for weight loss, and relief that she hadn’t come up with the ‘too fat’ judgement herself.

Mostly, though, I felt powerless. I’d tried to shield my child from diet culture and failed. Despite my efforts, the world’s message that our bodies are never good enough had found her.

The term ‘diet,’ of course, isn’t necessarily a dirty word. But equating thinness with virtue and encouraging the pursuit of a physical ideal through food restriction - the ideas central to ‘diet culture’ - are problematic, says Amee Severson, RDN, whose work focuses on body positivity, fat acceptance, intuitive eating, and social justice.

Though diet culture often passes for ‘wellness’ or ‘clean eating,’ it’s unhealthy, because people stop tuning into their own body’s signals about hunger and satiety, suggests Severson. By elevating thinness as the ideal physical state, moralizing food as good or bad, and promoting rule-based eating, diet culture disconnects people from their body’s nutritional needs. (That might be why despite widespread dieting, nearly all dieters regain lost weight within a few years.)

Like any effort toward self-improvement, dieting is well-intentioned. It’s also completely normal and accepted in our society, but that doesn’t mean it’s good for our bodies or minds, says Severson. “Even when it’s called ‘clean eating’ or ‘wellness,’ making food choices that don’t come from your own body’s cues, food choices that come from rules or moral judgements about good food or bad food, is considered disordered eating.”

Whether we like it or not, kids observe this type of disordered eating along with ideas about the right kind of body to have. Even well-meaning comments about body size from, “She’s really trimmed down! She looks great!” to “I’m just worried about his health,” can breed intolerance and exclusion at school and on the playground, says Severson. “Kids notice when we judge bodies or our own. Being fat is still viewed very negatively, and fat people are still the butt of jokes.”

Not surprisingly, kids quickly turn this type of judgement on themselves. Per research, the idea that other people’s fat bodies are inferior is linked to what researchers call ‘shape dissatisfaction,’ or unhappiness with one’s own body, along with dieting behavior in young children, disordered eating behavior, and eating disorders.

Kids aren’t the only ones harmed by diet culture, of course. By marginalizing people who fall outside the societal ideal - in our culture, it’s white thinness - diet culture harms the mental and physical health of trans people, people with different abilities, people with larger bodies, and people of color, per Christy Harrison, RD, host of the Food Psych podcast.

For Ivory Bruinsma, a certified fitness instructor who shares her journey with body acceptance through her Instagram account vibrantbrowngirl, rejecting diet culture meant rejecting the white standard of thinness. “I had to stop chasing white thinness and what white beauty looks like, because that’s what I mostly see in our culture,” says Bruinsma.

Unlearning diet culture can take decades, says certified health and running coach Rose Coats, so it’s worth trying to prevent kids from absorbing it in the first place. Now a race director who organizes inclusive Sporty Diva run/walk events, she models a healthier approach to food, one that doesn’t involve calorie counting, for her twin granddaughters. “It took me a while to get here, but I’m trying to show them a healthier way,” she says.

Fight back against fat shame

When well-meaning friends or relatives comment on your child’s size or food choices, a simple, “Please don’t comment on our food or our bodies” is in order, says Severson. “As parents, we’re the protectors of our children’s bodies.”

Families who prioritize health can do it in a way that doesn’t promote restrictive eating, says Bruinsma. A few years ago, her doctor advised weight loss after she survived stage-3 colon cancer. She resolved to find a way to heal her post-cancer, post-chemotherapy body without succumbing to diet culture or exposing her kids to restrictive eating.

“I was really hyper-aware about talking about weight loss in front of my kids,” she says. “They would ask why I was working out and I’d say, ‘Mama wants to be strong and play with you.’ If they saw me weighing myself, I’d say, ‘I’m checking how strong I am!’”

Even if you don’t think they’re watching, your kids can pick up on your deeply-held beliefs about fat and thin, good and bad, and who is worthy of love, says Bruinsma. And before you can keep diet culture from consuming your kids, you might need to heal yourself. “When I started my body acceptance journey, I stood naked in front of a mirror, at 200 pounds, and named each body part and why I loved it: ‘I love my legs because they carry me where I want to go. I love my stomach because it carried three babies.’ No matter what my body looks like, I’m worthy and I’m enough.”

For my part, I’ve found stronger footing since my daughter’s innocent introduction to dieting in her kindergarten classroom. Though I know I can’t completely shield her or her siblings from diet culture, now I know I’m strong enough to fight back. And David’s mom, if you’re out there, you’re strong enough, too.

Malia is a health and parenting journalist.