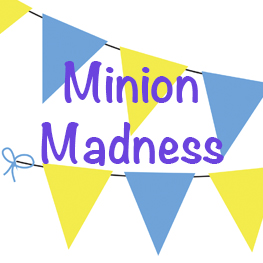 This year’s hottest characters are the lovable Minions. If your child is begging for a Minion-themed birthday party this year, we have just what you are looking for. Combine Minions with a simple back yard carnival and make your child’s birthday one they will never forget!

Flying Minion - Decorate a yellow Solo cup with a Minion face. Make a hole in the bottom of the cup and place it on a string hung horizontally between two points. Set up four stations like this to play ‘Flying Minion.’ The kids will then use ray (water) guns to shoot into the inside of the cup to push it to the end of the string. First one there is the winner.

Minion Switch - Decorate four empty water bottles to look like Minions - complete with goggles and blue overalls. Fill two bottles with yellow candies or beads and place the other empty bottles on top to connect the two with tape. These will be used in a race between two players to see how fast the yellow candies can drain from one bottle to another.

Penny Pitch - This classic carnival game is easy to set up and play. Place a yellow tablecloth on the table and tape down Minion or Despicable Me characters. Write a number on each character that will represent a small prize or candy. Kids toss pennies onto the table and try to drop them on a character to win the prize.

Minion Toss - Fill yellow water balloons and toss them back and forth between players all the way to the end of the line without dropping it. After each successful trip down the line, move the players farther apart and make them toss the balloon between their legs or throw the balloon with the opposite hand.

Pop the Evil Minion - Fill purple party balloons with air and slip in a piece of paper with a prize number (check party stores for Minion face balloons). Let the kids pick a balloon and on ‘go,’ try to pop it by stomping on it or sitting on it. When the balloon is popped, have the kids turn in their number and collect their prize.

Go Bananas - Everyone knows Minions love bananas. Line up the kids on the ground lying head to foot. Using only their feet, the kids pass a banana down the line of their team by lifting their legs over their head to the person behind them. If you drop a banana, you have to start over.

Frozen Minion - This is a fun game to play outdoors at the end of the party. Purchase a yellow T-shirt for every party guest. The night before the party, wet the shirt and squeeze into a ball shape. Put the balls of T-shirts in the freezer overnight. To play the game, give each kid a frozen shirt and see who can put it on the fastest. It’s a great game to cool off.

A Minion Grains of Sand - Set up stations with colored sand to create a minion in an empty mini water bottle. Using funnels and spoons, have the kids fill the water bottle one-third with blue sand for the overalls and two-thirds with yellow for the body. Decorate with a felt band for the goggles and one or two eyes for the face. Place a cap on top and wrap with black pipe cleaners with a few ends sticking up for Minion hair.

A Minion Carnival Party would not be complete without a face-painting station and photo booth. Etsy has a large selection of Minion photo booth props. If you are not an artist, purchase temporary tattoos instead. Feeling ambitious? YouTube offers tutorials on Minion balloon animals.

Pam is a freelance writer and mother of three. When the Minions movie comes out this summer, she will probably be the first in line.