The Secrets to Throwing an Epic Birthday Party on a Dime 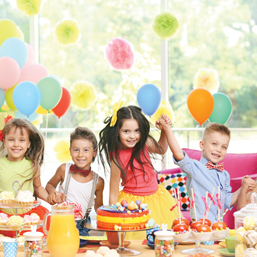 When I received the invite to my nephew’s pirate party, I was worried. The event was being held during the wintertime at his house, so all the five-year-old kids would be cooped up. How would over 20 kids be entertained in a small area indoors? Would I hear so many chaotic screams of “Arrrs” and “Ahoys” that I would want to walk the plank?

My fear subsided when I beheld the enormous cardboard-created pirate ship in the Stulls' living room. If the ship hadn’t been so crowded with kids, then I would have jumped inside of it myself. When I noticed organized activity stations set up throughout the house, I knew all the kids would have a blast! The party was such a huge success, my kids still talk about it four years later.

The pirate party isn’t the only impressive at-home one my sister, Tara, and brother-in-law, Mike, have hosted. They have had other events for my nephew and two nieces. The themes of their parties include knights and princesses, western cowboys and cowgirls, fairies and gnomes, Star Wars, and pirates. For all of their parties, they created a life-size cardboard centerpiece, such as a castle or western town for the kids to play in, and games centered around the theme along with a favor for their party guests to take home. Homemade treats and a cake are abundant at every gathering.

What are some secrets to throwing an epic birthday party on a dime?

Advanced planning. The Stull Family is already planning their next unicorn-theme party in June. They get ideas from Pinterest and other crafting websites, and sometimes they brainstorm ideas on their own. This planning helps them to have enough time to create all of the activities and cardboard centerpiece.
Potential savings: $25 to $50. Advanced planning allows them to buy sale items and use coupons.

Everything is homemade. Almost everything at their parties is homemade - from the cardboard centerpieces to the games, food, and favors. This significantly cuts down the cost of their parties, which were all under $200.
Potential savings: $50 to $75 by not buying a store- bought cake, games, or favors.

Teamwork. Tara and Mike Stull work together creating the life-size centerpiece, games, favors, and homemade baking. They also include their kids in the process of coming up with ideas and creating the items. By working together, they don’t become too overwhelmed with the planning and creating that is involved. It also makes the process more fun for the whole family.
Potential savings: $25 to $50 by working together.

Old-school games with a theme. At the Stulls’ parties, they offer simple games that everyone loves, and they incorporate the theme into the game. For example, instead of a typical water gun fight, they created a water gun shooting range for their western-themed party. Instead of playing Pin the Tail on the Donkey, they created Pin the Lightsaber on Yoda for their Star Wars-themed party. Some other games they played were a pirate scavenger hunt for gold coins, relay cowboy horse races, and ‘Beware of the Shark’ cardboard toss bean bag game.
Potential savings: $100 to $200 by hosting the party at home.

Finding free or discounted items. Tara and Mike asked local appliance stores for free cardboard boxes to create their centerpieces, games, and favors. They also got deeply discounted ‘mistake paint’ for a quarter of the price that people returned because they didn’t like the color they purchased from a home improvement store.
Potential savings: $25 to $50 by not purchasing cardboard boxes, games, and favors. They also saved money purchasing ‘mistake paint,’ which can be used for crafts, games, or painting cardboard centerpieces.

Using coupons and purchasing sale items. They purchase some of their items at Michaels and other craft stores using coupons. They also use coupons at the grocery store to buy the food for the party. Coupons can be found at a store’s website or app or by signing up for the store’s emails. Also, coupons can be found at online coupon websites.
Potential savings: $50 to $100 by using coupons and purchasing sale items.

Selling on Craigslist. After their last party, Tara and Mike sold some of the games used for $30. They plan to do this for future parties, too.
Potential savings: $50 to $100, depending on the items created and sold. You could also sell household items prior to the party to help fund.

These parties are a lot of work, but the whole family loves creating a memorable event. I know that my family is anxiously awaiting the next unicorn party at the Stulls! Who knows, maybe we will even spy a real one?

Cheryl Maguire holds a Master of Counseling Psychology degree. She is married and the mother of twins and a daughter. Her writing has been published in Parents Magazine, Upworthy, Chicken Soup for the Soul: Count Your Blessings, and Your Teen Magazine. Find her on Twitter @CherylMaguire05. Originally published on Signature Moms, signaturemoms.com.