How to Throw a Fabulous DIY Birthday Party 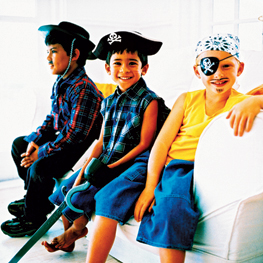 We are all looking for ways to give our kids memorable birthday parties without breaking the bank. Here are two unique ways to celebrate this special day, with quick and easy tips for money-minded hosts.

Turn your child’s favorite book into a birthday fantasy world and watch the ‘characters’ come to life!

Photocopy the cover of your child’s favorite book, such as Harry Potter and the Goblet of Fire or Harriet the Spy. Replace the title with the name of your party, such as ‘Luke Melvin and the Goblet of Fire Party’ or ‘Stephanie the Spy Party.’ Add party details in the empty spaces or around the edges. Ask the kids to come dressed as a favorite character from the selected book.

Check out a bunch of similar books from the library and set them around the room. Reproduce items or scenes from the story using construction paper, posterboard and markers. Inflate helium balloons, download and photocopy the faces of the characters, and tape them to the balloons so they float around the room. Hang pictures or phrases from the book on the wall or use them as placemats.

What’s my line?: Read first lines from a variety of favorite stories and have kids guess the titles. Or, read lines of dialogue from the book and have the kids guess who’s talking.

Trivia quiz: Ask trivia questions about the featured book and have teams race to answer.

Write it yourself: Have the kids brainstorm a new plot for the featured book or turn it into a comic book.

Scene it: Act out a favorite scene from the book, with lines and parts for everyone.

Choose foods from the book or make your child’s favorite foods and give them names inspired by the book, such as ‘Potter’s Pot Pies’ or ‘Spy Soup.’

Birthday cake: Make a rectangular cake and decorate it to look like the book cover (you can have a photo cake made at the bakery if you prefer).

Send the kids home with a copy of the featured book, or a goody from the book, such as a Harry Potter wand or Harriet the Spy magnifying glass.

Balloons are a fun and festive way to celebrate a birthday. Kids love helium balloons - and parents love how easy and inexpensive a balloon party can be!

Inflate balloons with helium. Write the party details on a balloon in permanent marker, put balloons in individual boxes and hand deliver them to guests for a surprise inside.

Greet the guests and set the stage by first decorating the front of your home with bazillions of helium balloons. Tie them to the mailbox, float them from the trees, line the driveway or walkway, and surround the door with balloons.

Next, decorate the party room with even more helium balloons - tied to furniture, attached to door handles, around doorways and tied to lighting fixtures. Don’t forget to fill the entire ceiling with balloons for a dramatic look! (Tip: Buy a Balloon Time Helium Balloon Kit as they typically help save both time and money.)

Step-and-pop: Tie a helium balloon to one ankle on each player. At the word “Go!” have the kids try to step on and pop each other’s balloons - while keeping their own balloons safe!

Pick, pop and perform: Write fun challenges on small pieces of paper for each of the players, such as “Do a silly dance,” “Hug a friend,” “Sing a pop song” and so on. Insert them into individual balloons, inflate the balloons with helium, tie them off and let them float around the room. Have players pick a balloon, pop it and perform the challenge inside.

Stuff a superhero: Blow up a bunch of balloons. Divide into teams and have teams choose one superhero from their group. Have the superhero put on a large set of sweatpants and a sweatshirt. On the word “Go!” have the kids stuff as many helium balloons as they can into the superhero’s outfit within a two-minute time limit. Count how many balloons were stuffed to find the winner.

Make balloon-shaped snacks, such as cheese and round crackers, round sandwiches, spaghetti-os or veggie rounds. Then serve a ‘round’ of drinks.

Birthday cake: Make a balloon cake using round pans, frost it with your child’s favorite color and insert the end of a licorice whip on the side for the string. Decorate the balloon with mini-balloons (available at party stores.)

Send the kids home with a bag of balloons, a balloon animal kit or their own balloon bouquet.


Penny has more than 25 years of experience as an author and party planner. She has published more than 50 books, including 16 specific to parties. Additionally, Warner writes a weekly newspaper column on family life, penned a column for Sesame Street Parents magazine and has appeared on several regional and national TV morning programs. Her latest book is Ladies’ Night. Balloon Time is the leading brand of consumer helium balloon kits in North America. Balloon Time kits feature a helium-filled tank, latex or foil balloons and ribbon, and are available at national retail chains, party goods and grocery stores nationwide. For more information, visit www.balloontime.com.