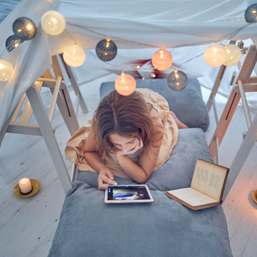 Pairing books with movies is an easy way to keep kids reading. While parents usually want their children to limit screen time, the silver screen may be the exception that encourages kids to read. Make movies, and the books that inspire them, the double feature that hooks kids on books.

Watching movies and books hand-in-hand gives parents the opportunity to discuss books with kids. For example, you can ask questions like these:

Here is a list of 65 books in a variety of genres that have been made into movies for kids of all ages. Many of the movies that go with these books can be checked out at the library for free. Fill your bookshelves, pop some corn, and make it a double feature!

Janeen is a mom, freelance writer and teacher who holds a Master's Degree in Education. Her favorite book/movie pair is Anne of Green Gables.

How to start a family book club