Help! I'm About to Become a Hockey Parent

Our three children grew up playing hockey in Calgary. Our sons are now 27 and 23; our daughter is 21. They all still love the sport. Here are five tips for parents who are heading to the rink for the first time: 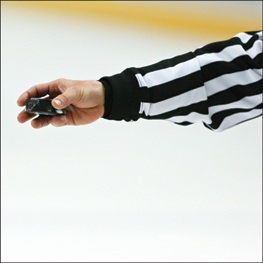 1. Hockey is a sport for children of all abilities (or lack thereof!). Our oldest son, Geoffrey, entered hockey at age eight. At his first tryout, he was one of the slowest skaters moving forward, and absolutely the slowest skating backward - if walking backward in a straight line is ‘skating.’ Children pick up skills quickly, and a few years later in a skills challenge, he was one of the fastest skaters on his team - and he was wearing full goalie equipment! Your child will be placed with children of similar abilities. Female players have the option of playing with Girls Hockey Calgary or playing on a co-ed team with Calgary Minor Hockey. Our daughter, Gillian, chose to play on co-ed teams.

2. Unless your child sings the national anthem, he or she is not likely to make it to the NHL. It is natural when children dream of playing in the NHL, but do not force your dream upon your children. In 2011 to 2012, there were 572,411 registered hockey players in Canada. The NHL needs approximately 700 players each season. If your child is really that gifted and that driven, it will become apparent to the scouts before you know it.

3. Your child might get injured playing this game. Injuries are part of life, and they happen in every sport. Make sure your child has full protective equipment and wears it properly. When you register your child for hockey, the organization will specify what equipment is required.

There has been a lively debate in Calgary recently about the future of body-checking in minor hockey, but injuries may result from accidental contact. In 2001, our son, Douglas, was skating around the ice, warming up for a try-out. A fellow player bumped him. Douglas fell to the ice, and broke two bones in his right arm. Geoffrey played goal - so players were not supposed to hit him at all. He sustained at least two concussions, both of which were from shots that hit his CSA certified mask. If you do not want your child to be involved in body-checking, Hockey Calgary does offer a non-contact, recreational league.

4. Minor hockey is fueled by dedicated volunteers and non-professionals. Coaches and referees are doing their best so that players can enjoy the game. Criticizing them will not help them to perform better. An NHL game has two referees, two linesmen and video review goal judges - and they still make mistakes. Do not expect perfection when you see two teenage officials at your child’s game. Expect to be recruited to volunteer your time. Many of these roles do not require a prior knowledge of hockey. Find a niche where you fit and embrace it.

5. When your child has had enough, that is the time to shut it down. This is supposed to be fun, not a chore. Geoffrey stopped playing at age 16. His passion for the game remains undiminished, as his ongoing refereeing and attendance at World Junior Championships attest. Douglas played in the recreational league at the junior level. Gillian started playing to learn the rules so she could referee, but enjoyed playing for six years! Let your children choose when to leave the ice surface - preferably while they still love the game. Our children still love it (and they may be the officials at your child’s game!).


Philip is a passionate hockey fan who lives in Mount Pleasant with his wife, Linda, and their cat, Sputnik. He is a former board member with the Recreational Hockey Association of Calgary, a former referee and received an award for service to community hockey from Hockey Alberta’s Referees Council in 2008.