Give Sports a Chance! 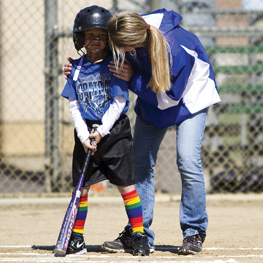 Growing up, I pretty much failed at every athletic endeavor I tried... anything I was introduced to in PE class which resembled a sport, that cringe- worthy summer of softball, and those two hilarious years of ballet and tap. You’d think I’d try to steer my kids away from sports but instead, I do what I can to encourage them to give sports a try.

Here are some cool things I told my kids they will learn about participating in sports:

1. Trying something new might lead to unexpected things. First of all, tell your kids that they might have more fun than they thought they would, and they might make some amazing friends on the team! Participating in sport is a break from screens and the (sometimes mundane) routine of home life, too. At the very least, they are getting some exercise and learning new skills when they try a new sport.

2. Showing up is half the battle. Your kids might not feel like going to their practices and games, especially if a losing streak has visited their team, if they’re having an issue with a teammate, or are tired of playing outside in the cold or heat. Ask them to think about how they have to show up at school or they fail. Teach them that the virtues of showing up every time and committing to something will extend into more areas of their life later on, like friendship, family, work, and marriage. Teach them to be the kind of person who shows up consistently because it’s going to be a real stand-out character trait as they get older.

3. Learning how to handle disappointment will carry them through life. When your kids are older, they may get fired from jobs, fail exams, tank a few relationships. Advise them that it’s okay and important to experience losing when they’re young because it prepares them for how to handle greater disappointments later on in life.

4. Being a good winner improves character. Learning how to be a graceful winner is just as important as learning how to be a graceful loser. Gloating and bragging are not cute traits in kids - and definitely are not cute traits in adults, either. Advise your kids to shake hands with the opposing team after each game and tell the other team they did a great job. “Good game!”

5. Games aren’t always going to be fair. No matter what the call is or how the other team plays, your kids should always play fair. A good athlete - and person - is honest and trustworthy. Also, a ref may make a call that was seen from a different angle or viewpoint and your child may know for a fact it was one way, but they still have to respect the ref’s call on the play.

6. Teamwork is everything. Advise your kids that throughout life, they will need to participate in a team setting and it’s always important, no matter the situation, to listen and support others and respect individual differences. And whether they succeed or fail as a team, they need to do it together. Every member of the team is important, so they should never downplay their place (or the place of others) on the team.

7. Often, confidence and passion make up for a lack in ability. Reassure your children that they will go into a game more confident if they made all the team practices and practiced at home, too. Your child isn’t the best kicker on the soccer team? They need to tap into their inner confidence, take a deep breath, and keep trying. Your child doesn’t need to be scared to fail, they just need to do their best, practice, and try their hardest.

8. Mistakes are how we learn and something we all make. A child may want to groan when someone on their team doesn’t make an easy shot. Instead, your child needs to understand that everyone on their team is also learning, just like they are. It’s important that your child doesn’t throw a fit if the ref makes a bad call or if their coach takes someone out, and then the team loses the game. Your child is going to mess up, too, and wants the same patience from their teammates, refs, and other parents and coaches.

9. Leadership opportunities always present themselves. I love the sports teams who rotate the team captain’s responsibilities, so every teammate can give it a try and see if they have a strength they didn’t realize they had. Even if your child is not captain, they can still exhibit leadership skills by helping out younger kids or kids who need extra help honing their skills. Teach your child to help out whenever they can, including handing out snacks and drinks to players after games.

10. Downtime is okay. Ah, patience. Sometimes there is waiting around in sports. Some sports move more slowly than others, and some teams have more players than others. Let your child know that sometimes they may have to play the entire game and sometimes they’ll be sitting out for half of the game, but they can use the downtime to make friends on the bench while still paying attention and cheering on their team.

What will you and your kids learn if they give sports a chance?

Kerrie is the mom of five who is surprised to find herself teaching physical education at the homeschool co-op year after year - and loving it! For more information, visit thekerrieshow.com.