7 Signs You Probably Shouldn't Coach Your Kid at Sports 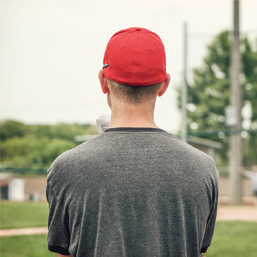 You signed your child up for soccer or hockey, and then the league sent you an email: ‘We need coaches!’ Maybe you had never coached kids’ sports before, and you thought it might be fun to coach. Maybe your coaching credentials are as long as your arm, and you counted down the days to when you’d be able to take to the ice and coach your Timbit. Either way, you were excited to help out and have been coaching ever since.

But coaching your child’s sport of choice isn’t always the best dynamic for parent and child. How do you know if your coaching days are over? Here are seven signs that it’s time to hand over the whiteboard and whistle.

1. Car rides home from games have become critique sessions. Most sports leagues have a ‘24-Hour Rule’ where parents are expected to wait 24 hours before approaching their child’s coach with an issue. Your child deserves the same courtesy. If your car ride home or dinner table conversation has become an intense play-by-play of the highlights and lowlights of your child’s performance at the game, you may be struggling to separate your coaching role from your parenting role. Outside of the hockey rink or soccer pitch, your child should see you as parent first, coach second (it should be parent first, then perhaps chef and chauffeur, several other roles and responsibilities, and then somewhere near the bottom of the list: coach).

2. Car rides home after the game have become a dome of silence. There are many perks becoming involved in your child’s sport. Research shows that children are more likely to stick with an activity when a parent is supportive, and your involvement provides an incredible bonding opportunity for you and your child… until it doesn’t. It’s important for your child to know there are many important facets of their day, their abilities, their personality, and that you support and are interested in all these facets. If your bond has become game talk and nothing else, maybe it’s time for a timeout.

3. Your child is distracted by your presence on the ice, field, or pitch. Some kids are undeterred by their parent’s presence, and others feel a constant gravitational pull toward their parent. Tying a cleat and adjusting an elbow pad are normal parts of coaching young kids, but if your child struggles to engage with anyone other than you, or if your relationship becomes a disruption to the rest of the team, you may want to make yourself scarce. Skip a practice or two and see how your child fares on their own.  Developing a respectful relationship with a non-family member, like a coach, is a skill they will learn easier without you there.

4. You’re harder on your kid because hey, that’s your kid! We all do it. It’s hard to look past your child’s mistakes and missteps and think about what needs to improve in their performance because part of parenting is helping your kid become better because when you look at them, you see their enormous potential. But give praise where praise is due. And if you’re uncomfortable acknowledging your child’s game-winning goal in the dressing room or if you’re pushing them harder than their peers because you know they can handle it, think to yourself, Would I treat anyone else’s child this way? Your child deserves the room to grow - and oodles of encouragement - just like everyone else on the roster.

5. You’re easier on your kid because, hey, again, that’s your kid! As a coach, it’s tempting, and often unintentional, to give your kid a slight advantage - your child doesn’t want to take their turn in net or struggles in a particular drill or is a standout in centre and weaker on defense and this is an important game! We all want to see our kids shine, and it’s hard to see them struggle on the big stage. But kids’ sports are about development, not winning. Robbing your kid of the ups and downs isn’t advantageous to them. Not to mention, you might have some agitated parents in the dressing room when they see that every child is expected to rotate positions, except yours (don’t forget the 24-hour rule!).

6. Your child wants to quit. Last season, your child slept clutching their mini stick and bounded out of bed for their excruciatingly early ice practices. This season, you have to coax them into the car, into their gear, and onto the ice. Even then, their spark is gone. Kids move on from activities, and that’s normal. Sometimes, we’re also guilty of pushing them too hard and too young by asking them to specialize in one sport at an early age. If their love of the game has been eroded by angry car rides home, criticisms, and the tense dynamic of you as their coach, find a way to help them thrive again. It’s about them, not you.

7. You want to quit. A lot is asked of volunteer coaches, even in the youngest age divisions. And sometimes, too much is asked of them. If you’re looking longingly into the stands at all the other parents who are having fun at the game and you aren’t, maybe it’s time to move on from coaching. If your league requires parents to volunteer, try an assisting role instead of head coach. Work the score clock, fundraise, bookkeep, or wash the jerseys every week (maybe every day - have you smelled the dressing rooms lately?). In the end, there are many ways to support your kid from the sidelines and still foster their love of sports. They won’t love it any less if you trade your whistle in for a cowbell. Sure, your kid might be embarrassed, but they’ll certainly hear you cheering them on!

Shannon is a freelance writer living in Calgary with her husband and three daughters. She is a proud hockey mom and is forbidden from owning a cowbell.