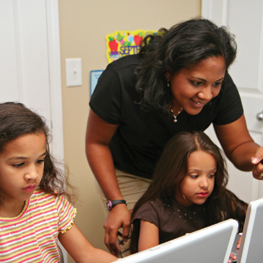 If Mike Beery knows his way around pixels and PhotoShop, it’s no surprise; he’s a seasoned graphic designer. More surprising is the fact that he manages his home-based business alongside a bustling classroom - together with his wife Debi, a nurse, Beery home schools the couple’s two children, Grace, 11, and Gavin, 8.

Because they don’t fit into the mold of the typical home schooling family - stay-at-home mom, breadwinning dad - people are surprised that home school works for them, says Beery. “But if we can do it, anyone can.”

The Beerys illustrate the changing image of home school. Like the graphic images Mike creates for clients, it’s a picture colored by modern technology, as electronic curricula and online schools make home education a possibility for people from all walks of life.

Once thought of as an educational off-ramp for a select few, home schooling is now a viable option for families that might not have considered it a decade ago. The population of home schooled students grew by about 7 per cent from 2007 to Spring 2010. According to Brian D. Ray, Ph.D., founder and president of National Home Education Research Institute (NHERI), there are now over 2.04 million home schooled students in North America - an increase of 140 per cent since the turn of the last century.

Just who is home schooling these students? The needle hasn’t moved in terms of home schooling demographics; there is still more than a grain of truth to the belief that home schooling families tend to be white, religious and larger than average.

According to published reports from the National Center for Education Statistics (NCES) and the NHERI, the vast majority of home schooled students are white (77 per cent), and their families are helmed by married parents (97.9 per cent), with a mother who doesn’t work for pay (81 per cent). Most of the families (68.1 per cent) have three or more children.

According to the NCES, parents’ top reasons for choosing home schooling have remained consistent: the desire to provide moral education, concerns about the school environment and dissatisfaction with the academic instruction at local schools. The overarching theme, says Ray, is that most parents who choose to home school believe they can provide a better education at home, and they embrace their right to do so. That aspect of home schooling hasn’t changed.

So then, what has changed about home schooling in the past decade? What is prompting families to jump onboard? According to Ray, it’s a combination of technology-aided learning and a corresponding surge in educational options for home schoolers, from free, government-run online schools and online tutoring to turnkey DVD curricula.

These new educational offerings remove a major access barrier to home schooling: the need to have a parent at home full-time.

By reducing the intimidation factor, the isolation and even the parental workload once associated with home schooling, online schools and complete-school-in-a-box curricula make it possible for working parents, single parents and other nontraditional home schoolers to successfully educate their kids at home.

Parents can choose from a growing menu of options to completely customize their child’s education, and that’s extremely appealing, says Ray. “With the variety of support systems, curricular materials and online support services that are available, there is absolutely no lack of anything that a home schooling family could want,” he says.

Mike Beery finds balance with a DVD home schooling curriculum that provides video instruction and lesson plans for each child. It’s rigorous and fairly structured, and, because the lesson plans come already tailored to each child’s grade level, Beery doesn’t need to spend hours each night preparing the next day’s schoolwork - something he doesn’t have the time for, since he often works at night. Prepping for each day takes about five minutes, he says.

Technology facilitates learning in a way that home schooling’s early pioneers couldn’t have dreamed of, says Kelli Barr-Lyles, who is home schooling her two sons, Jonathan, 13, and Christopher, 9. Christopher is studying computer animation, something she doubts he would be able to pursue at a traditional school. Whether this is a real interest or a passing phase, she’s more than happy to help him follow his current passion. “The best thing about home school is the level of customization it offers. I can follow their interests.”

Technology also increases the feeling of being connected and creates a sense of community, says Barr-Lyles. Finding support is important, especially as kids get older and the playdates and parent-child gym classes that once provided regular interaction with other home schoolers taper off. Luckily, the nearest home school group is usually just a few clicks away on the Web. “There’s plenty of support out there,” she says. She belongs to “at least a dozen” home schooling support groups through Yahoo and www.meetup.com.

Community programs, often facilitated and managed online, allow home schooling families to circumvent one of the primary challenges associated with home schooling: socialization. Through community home schooling programs, such as swim lessons and regular playdates, the Beery kids interact with kids of all ages, and adults too. “That’s important. I think my kids probably get more and better socialization than they would in public school,” says Mike.

But there can be downsides to the explosion of technology-aided home schooling, says Ray. Often, too many choices mean that home schooling can be overwhelming to newcomers. “When your child attends public school, the curriculum is figured out for you,” says Ray. But home schoolers are faced with the significant challenge of sifting through dozens of curricular offerings and countless websites and message boards to find out which approach is best for their unique child. It’s information overload, plain and simple.

Even with the world of technology-aided learning at their fingertips, modern home schoolers shouldn’t discount the importance of face-to-face support. Local support groups, with their meetings, group activities and field trips, are always going to serve an important role, notes Ray. “People still want – and need – high-touch interactions,” he says. “I think that piece is never going to go away.”

Freelance writer Malia was home schooled  in the late ’80s and early ’90s.