Fantasy Play: the Work of Childhood 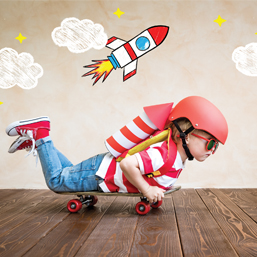 We’ve all heard that play is the work of childhood and it’s true. And fantasy play - pretending to be a dinosaur or a king or queen - is a specific kind of play that children benefit from in many ways.

You don’t have to encourage most children to pretend. Pretend play is universal amongst children from about the ages of two-and-a-half to six or seven. Left to their own devices, children will engage in an endless variety of imaginary conversations, storylines, and adventures. Research has shown that children engage in fantasy play with more intensity and intentionality than in more formal play, such as a baseball game or board game.

The value of fantasy play

When children design a play scenario, they are doing a lot of ‘work.’ First, they decide upon the fantasy world. Maybe they decide they want to explore space. Then they assign characters to their roles. Maybe there is a spaceman and a pet monkey, both set to explore. And then, in the course of the acting out, they may encounter a problem to be solved. The monkey gets scared and won’t enter the spacecraft. Just think of all the creativity and problem-solving that is happening in that story.

When children engage in fantasy play, they’re doing more than playing. First, one of them comes up with a play idea, creates the play scenario. Second, a child convinces others to join in the fantasy and then the negotiations begin as to which role each child will play. What will happen? What is the story they will act out? Third, the children act out the fantasy, pretending and allowing the story to unfold as they go.

All of this activity involves the social skills of negotiation, empathy for others, and the ability to orchestrate a plan. In addition, children will share their joint knowledge of the vocabulary involved with a certain scenario. For example, in playing king and queen, they may use such words as castle, moat, prince, princess, knight. They may experiment with kingly and queenly language such as, “You shall serve me” or “Yes, Your Highness.”

As the fantasy play continues, there will invariably be opportunities for social skill development. When a child goes off-script, the others have to pull that child back in. If an argument arises, one member of the group needs to intervene with a solution. The rules must be decided on and then implemented. Often, the negotiations for rules and how to play take up a major part of the fantasy session. Not to worry. These negotiations are an important part of the entire process.

In fantasy play, major life themes are explored. The superhero wants to save the world, fears and insecurities are overcome, and good always wins out over evil. This is important work for young children. Some of the universal themes recurring in fantasy play are good vs. bad, big vs. little, brave vs. cowardly, oppressor vs. oppressed (good guys, bad guys), security vs. fear, and love vs. hate.

Ways you can foster fantasy play

It’s important to encourage this sort of open-ended but extremely important play at home. Here are some things you can do to encourage your children to jump into fantasy:

And when they’re through with flying to the moon or saving the planet from disaster, they’ll go on to another story and be finished just in time for dinner!

Jan Pierce, M.Ed., is a retired teacher and a writer. She is the author of Homegrown Readers and Homegrown Family Fun. Find her at janpierce.net.