Step Away From the Tech! 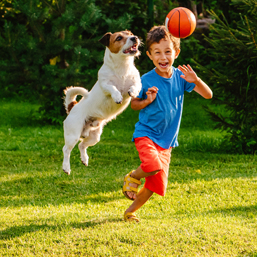 Typically, kids spend several hours a day immersed in low-sensory, pixelated landscapes rather than outdoors playing in the mud, climbing trees, examining bugs, rolling down hills, or making up games. As a consequence, kids are less focused, get frustrated more easily, and struggle with more advanced social skills like negotiation, problem-solving, and conflict resolution.

Technology is addicting and it’s keeping kids from engaging the senses, developing the muscles, and all of the fundamental things that help children develop properly,” says pediatric occupational therapist Angela Hanscom, author of Balanced and Barefoot: How Unrestricted Outdoor Play Makes for Strong, Confident and Capable Children. “We’re at the point where we are seeing kids have pretty significant sensory issues because it’s almost like a sensory deprivation of our environment.”

Research finds that time outdoors improves our overall fitness, helps us sleep better, enhances creativity and cognitive skills, boosts our ability to fight disease, and even helps children with ADHD and anxiety better regulate their moods.

1. Regulates emotions. “Exercise and nature are the prescriptions that have helped my kid,” says Tammy Muzrall, whose son Nathan, 11, struggles with anxiety and social issues. “Nature is calming. It’s healing. It naturally rebalances you. All you have to do is walk in it.” About four years ago, Tammy began taking Nathan to a forest school near her home. The school is situated on 10 acres and invites people of all ages to engage with nature through play, exploration, and awareness.

“If a child tends to be hyperactive, or if they are moving a lot or really fidgety, that means they need to move more. That movement will help their body to naturally regulate their emotions,” explains Hanscom.

2. Fosters social skills. Nathan enjoys both the social and playful aspects of the forest school. “To find other like-minded kids who are wired like us was a breath of fresh air,” says Muzrall. “He loves jumping in the pond and climbing the trees. And, sit spots are his favorite.” During ‘sit spots,’ each child finds a patch of grass, a tree, or any spot that appeals to them where they can sit alone and notice their surroundings. They don’t have to sit perfectly still. They can dig around in the dirt, watch for wild animals, or listen to the birds.

Even 30 minutes a day spent sitting in your yard, witnessing nature in action, is therapeutic for adults and kids alike.

3. Promotes creativity. Kids often complain that spending time outside is boring or uncomfortable. Hanscom suggests encouraging your kids to get inspired by your environment. Try throwing in a few age-appropriate supplies and tools to rev up their imaginations. “Place out different adult items like trays or kitchenware by mud puddles,” she says. “Bring out baskets with pulleys, string, and scissors or planks and trucks by a slow-moving river. Giving them materials quickens the process of being creative and having ideas of what to do outside.”

Invite friends for a (socially-distanced) day of outdoor play rather than just for a few hours, which will give kids time to inspire each other and come up with ideas for their discoveries. For example, how many ways can they use a stick? One child might use it to scratch letters in the dirt while another begins building a fort.

4. Cultivates environmental stewards. Conservationists worry that disengaged kids also become less interested in caring for the environment. Jodi Crutchfield, a mom of two children, Addi, nine, and Sammy, six, believes in fostering an appreciation and empathy for the world outside with her children. “They have learned how cool animals, bugs, and spiders are. We can play with them a little bit, but we don’t hurt them, and we put them back where we found them,” says Crutchfield. “They understand the idea of ‘leave no trace.’ They pick up garbage when we are on hikes and can spot a piece of garbage 100 yards away. I was so proud last summer when both kids finished a week-long camp, and both earned a ‘Most Connected to the Environment’ award within their camp troops.”

5. Enhances mindfulness. Time spent in nature grounds us in the present moment, giving us space free of distractions where we can focus on the sights, sounds, and smells surrounding us. Even if your child is reluctant, gently coax them out the door to explore a nearby trail or simply relax in the shade outside with you.

“They don’t know that it’s going to be good for them,” says Daniel. “They go around with technology bombarding them all of the time, and they forget who they are. They forget that they came from the earth, and they’re going back to the earth. You are part of everything. You’re part of the forest. You’re part of nature. It’s part of you.”

Christa is a nationally-published freelance writer. As the mother of two boys, she knows first-hand how time spent running outside can be transformative to how well her family sleeps and manages stress.