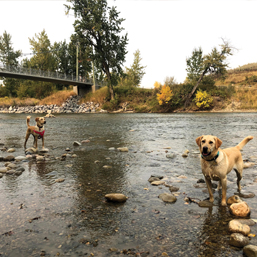 Strolling the same old neighborhood sidewalks and taking in the same scenery day after day with your pup can quickly become a bore… Read on for Calgary’s best urban walkabouts so Fido enjoys marking new territory in town while the rest of the family enjoys exploring unique locales in our great city, making the most of the ‘dog days’ of summer - and fall!

A mix of on- and off-leash, pups will have everything they ever dreamed of on this urban walkabout that follows the Elbow River to escarpment views. Start at Sandy Beach Park and walk along the river pathway to Sandy Beach Bridge. Cross the river and take one of the two paths up the Britannia Slopes to an off-leash area boasting big mountain views. Continue north along the escarpment before taking the stairs down to the fenced Riverdale Off-Leash Park to throw your pup’s favorite ball, stick, Frisbee or to socialize with other pups before heading to the treed river trail. Water dogs can take a cooling dip or play fetch in the water before climbing the forested stairway trail to River Park Off-Leash Park where you can continue walking north to make a loop of the park. From its escarpment perch, River Park offers spectacular views of the downtown core and Elbow River below. Something unique about this area? Keep watch for Bald Eagles at eye level as they soar along the river valley! Once at the fence, loop back south through the park before dropping to the river valley on one of the many trails or take a detour into the neighborhood to visit Neighbour Coffee at 40 Avenue and 16 Street. This is a wonderful stop for a hot drink, a baked treat, or lunch!

From the Stanley Park parking lot, go uphill to Parkhill, a neighborhood with unique architecture. Skirt the escarpment along grass paths and soak up big views of the Rockies and the community of East Elbow below. A set of stairs at the end of 2 Street leads you to Mission Road, which is the next green-space gem: Roxboro/Erlton Natural Park. Calgary has an abundance of off-the-sidewalk trails that give the urban hiker and exploring pup the feeling that they are walking in a remote wilderness area. Wolf willow shrubs canopy the trail as you climb from Mission Road into the park space. Walk the escarpment trail and soak up the big views of Calgary’s towering core before dropping to the Roxboro Off-Leash Park. Continue along Roxboro Road and detour north along 4 Street to find drinks and eats, or cross Mission Road into Rideau and follow it back to the Elbow River Pathway and Stanley Park.

Walk north along Edgemont Hill and watch for the paved path cut through to Edgemont Hills off-leash area. At its highest point of 1245 metres, Edgemont offers expansive views of Calgary. Exposed slopes fill with wildflowers from April through August and host impressive windswept snow drifts in winter. Dogs can run free, explore, and burn off some energy while continuing west on one of the many dirt paths that crisscross the hill. Stay high and enjoy views throughout or drop low and climb up again for a physical challenge.

Cross Edgemont Boulevard and follow the pathway into Edgemont Park Ravines, a manicured multi-use park with paved paths, art installations, and playgrounds for the kids! The ravine trail offers a relatively flat trek through a pleasant green space. Turn the corner at the T-junction and the park becomes less manicured, more natural. Thick willow shrubs consume the north-facing hillside, creating a sheltered home for mule deer. Listen for the Edgemont Park Ravine. Before reaching the ponds, the bird chatter is loud and clear. Cattails line the sides of the water and attract red-winged blackbirds, which have a distinctive sing-song call.

Starting-point parking: Official parking lot on Edgemont Drive, just north of John Laurie Boulevard.
Facilities: Friends Café is close by! This is a great spot to grab lunch for the walk.
Tip: Enjoy a family picnic at one of the many picnic tables in Edgemont Park Ravines.
Dog highlights: Running free, exploring, and burning off some energy in the Edgemont Hills off-leash.

Lori’s new guidebook, Calgary’s Best Walks Expanded, has 45 walks with maps and 40 suggested detours (all perfect for people and their pups!). She leads city walks and mountain hikes with her company, Fit Frog Adventures. Grab a copy of her book or connect on Instagram and Facebook, and at fitfrog.ca.