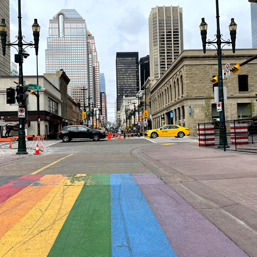 Walk back in time and explore Calgary’s rich history together as a family!

Begin your walk in the off-leash area that was once known as Grasshopper Hill and climb to wide-open views of the downtown skyline and the communities below. Briar Hill soon becomes Hounsfield Heights, Calgary’s north-side Mount Royal. In the late 1800s, lawlessness and whisky trading marked this area before the North-West Mounted Police arrived in 1875, built Fort Calgary, and helped bring some order to the chaos. The Canadian Pacific Railway arrived in 1884, and that meant Calgary had ‘arrived’ as an urban centre.

Hounsfield Lodge Farm, owned by Thomas E. Riley and Georgina Jane Hounsfield, was the original settlement in the Briar Hill and Hillhurst area. In 1890, the property extended from Sunnyside to Parkdale in the west, and from the Bow River to 16 Avenue in the north. Calgary’s growth by 40,000 people between 1900 and 1910 meant that this land was in demand, and the family decided to subdivide and sell.

On June 10, 1910, the Morning Albertan featured the following headline, “Hounsfield Heights; All View Lots - An Ideal Location for an Ideal Home,” accompanied by a view of the subdivision of Hillhurst from the top of the bluff. Instructions on how to get there included a walk “through the park donated by Mr. E. Riley,” now known as Riley Park. A substantial price tag meant that only the moneyed could afford to live there. Hounsfield Heights was to be the “Mount Royal of the North.” In 1913, a recession hit, along with threats of war and increased unemployment. The overheated economy came to a crashing halt. When you walk through Hounsfield Heights today, you will see that it did, in fact, become a mini-Mount Royal of the North, 100 years after the fact.

Starting-point parking: Park along 9 Avenue, east of 22 Street NW.
Tip: Stop for coffee and a bite to eat on 19 Street NW.

Alberta’s trademark big blue skies are a constant companion when you walk around Glenbow Ranch. When you walk here, you follow in the footsteps of the First Nations peoples who lived and hunted in the area up to 4,000 years ago. Evidence of tipi rings, cairns, and bison kills have been found at the ranch. The area was later established as Western Canada’s first big ranch, named the Cochrane Ranche in 1881. Here, ranchers discovered their cattle could not withstand the harsh winters as the bison had; a lesson that was critical to the success of future Southern Alberta ranches.

Cattle still roam the fields, as the park remains a working ranch. Grazing helps maintain the health and vigour of the fescue grassland landscape. In the fall and winter, the cattle eat the tall, protein-rich grasses. Their cropping of the grasses allows sunlight to reach the roots, leading to healthy grass growth in the spring. Interpretive signs along the route provide interesting background on Alberta’s ranching heritage and geological history. A walk here calms the mind and refreshes the spirit!

Starting point: Glenbow Road, off Highway 1A, about 4 kilometres east of Cochrane.
Facilities: Bathrooms at the trailhead.
Tip: Pack a few snacks to refuel along the way.

Walk 3: Downtown and the Beltline, SW

Engage in this public-art and mural treasure hunt through the downtown core, East Village, and the Beltline. Starting at the glassy, swirling, sloping masterpiece, the Calgary Central Library, walk back in time to Calgary’s historic heart along Stephen Avenue. Named after Lord Mount Stephen, the first president of the Canadian Pacific Railway, 8 Avenue hosts many of the sandstone buildings from Calgary’s early days. After the fire of 1886, local Paskapoo Sandstone became the material of choice for schools, Calgary’s first library (Memorial Park), and the old City Hall.

Slow your pace and appreciate walking for walking’s sake, to simply experience the urban cityscape, alleyways, and hidden corners and surprises. Become a flâneur, which, according to the early 19th-Century French, was a leisurely urban explorer who observed and contemplated as they sauntered.

For those who would like to pick up the pace and travel farther, walk south into the Beltline, a community that is being rejuvenated with murals, thanks to the Beltline Urban Murals Project (yycbump.ca). Every summer since 2017, mural artists have been creating colorful pieces of art on the buildings throughout the Beltline.

Starting point: Downtown Central Library.
Facilities: Bathrooms at the library. There are a variety of cafés and public buildings along the route.
Tip: Calgary’s Central Library is not only gorgeous, but also full of opportunities! For families, there is a 12,000-square-foot Children’s Library, a gaming area, and a wide variety of programs for kids, as well as a play structure to keep children engaged.

Lori’s guidebook, Calgary’s Best Walks Expanded, has 45 walks with maps and 40 suggested detours. She leads city walks and mountain hikes with her company, Fit Frog Adventures. Grab a copy of her book, join her on a walk or a hike, and connect with her on Instagram, Facebook, and at fitfrog.ca.