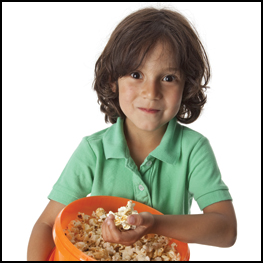 Feeling haunted by the sugar surges of Halloweens past? Why not gather up your little brood of goblins for a sweet movie marathon sure to get you in the hallowed mood – no candy required. These not-too-spooky flicks are a festive way to build up to a big night of “Trick or Treat!” without terrifying anyone in the family. The films range in appropriateness from toddler to teen, with age recommendations that should satisfy even the most cinema-selective parents. So, what are you waiting for? Whip up a big bowl of your favorite popcorn, grab some 100 per cent fruit juice and cuddle up close on the couch for a night of lightweight Halloween chills.

1. It’s The Great Pumpkin, Charlie Brown (Not Rated, ages four and up). For Linus, it’s not Halloween without the Great Pumpkin. For some of the rest of us, it’s not Halloween without an animated 1966 Charles Schulz cartoon accompanied by Vince Guaraldi piano music. Share the annual tradition with your kids so they can meet Charlie Brown, Lucy, Sally, Pigpen, Violet, Schroeder and the whole gang. Remember, never jump into a pile of leaves with a wet sucker. And never miss an opportunity to introduce your kids to Peanuts.

2. Sleeping Beauty (Not Rated, ages five and up). While we are introducing our kids to things, why not also introduce them to a classic 1959 Walt Disney film? This artfully created adaptation of the fairytale La Belle au bois dormant by Charles Perrault with music by the Berlin Symphony Orchestra will have you all humming Once Upon A Dream for days afterward. But brace yourselves for the entrances of the Maleficent; she may strike a few poses more wicked than you recollect. Luckily, her evil plans will be met by the efforts of three hilarious, good fairies: Flora, Fauna and Merryweather, who help Aurora realize her dreams by the tale’s end.

3. Beauty and the Beast (Rated G, ages six and up). This 1991 Disney tale as old as time is also based on a fairytale - this time, La Belle et la Bête by Jeanne-Marie Leprince de Beaumont. Belle is a bookish girl, who is not satisfied with life in her provincial French town, nor the advances of Gaston, her conceited suitor. She adores her eccentric inventor father, though, and unwittingly follows him into the clutches of a hideous beast, who teaches her, with a little help from his enchanted servants, how appearances can be deceiving.

4. Escape to Witch Mountain (Rated G, ages seven and up). They just don’t make Disney movies like this any longer. A brother and sister with curious psychic powers and a “star box” are the central focus of unraveling this 1975 sci-fi mystery. Tia and Tony don’t know whom they can trust beyond each other, but thanks to an unlikely ally played by Eddie Albert, the orphans reunite with their kin eventually.

5. Shrek (Rated PG, ages seven and up). This film combines the ogre from William Steig’s original book with storylines borrowed from many well-known fairytales to create a buddy adventure meets romance with a twist. The all-star voices of Mike Myers, Cameron Diaz, Eddie Murphy and John Lithgow up the funny factor for DreamWorks Animation’s first animated hit. Heavy on the laughs and light on the scary, this 2001 film is sure to amuse the whole family.

6. The Wizard of Oz (Not Rated, ages eight and up). This masterful 1939 film may be scarier than you remember, making it the perfect Halloween family fare. When I was a kid, it was mean old Miss Gulch and what she was going to do to Toto, not to mention the sight of Dorothy’s house twirling in the tornado that frightened me. Forget lions and tigers and bears. Remember flying monkeys and witches and Winkies? Fortunately, the darker aspects of the story are balanced out by lighter characters like Dorothy, Glinda and Munchkins making this a one-of-a-kind heroine’s journey your family will want to watch again and again.

7. Pinocchio (Rated G, ages eight and up). Based on The Adventures of Pinocchio by Carlo Collodi, this 1940 animated film won two Academy Awards for its inspiring music. But don’t worry, Pinocchio gets himself into plenty of tight spots to merit the need for all of this musical genius. In fact, he gets himself into so many tricky situations - skipping school, becoming part donkey, landing in the belly of a whale - that this film can serve as a kind of cautionary tale for kids who are fond of telling tall tales of their own. There are some great lessons about the perils of peer pressure in this timeless movie as well.

8. E.T. The Extra-Terrestrial (Rated PG, ages eight and up). Science fiction is a mysterious genre to many of us already, and the addition of a strange but sweet alien may up the fear factor in young children. Literal-minded thinkers may also need some coaching to appreciate this artful 1982 blockbuster film from Steven Spielberg. Compelling performances by movie siblings Henry Thomas, Drew Barrymore and Robert MacNaughton may even convince you to break out some Reese’s Pieces before the 31st. A heartfelt film every family should see together.

9. Harry Potter and The Sorcerer’s Stone (Rated PG, ages nine and up). I don’t know too many kids who would mind being selected to attend Hogwarts School of Witchcraft and Wizardry. Unfortunately for Harry Potter, a mortal enemy comes part and parcel with his invitation. But Harry has got plenty of pals to help him make it through not just this movie, released in 2001, but also the next seven in the series. Why not urge your kids to finish reading the first book before viewing the movie? You might set a precedent that will have them reading all seven books as fast as they can just to get to each movie reward.

10. Corpse Bride (Rated PG, ages nine and up). This film is stop-motion animation at its best. If your kids can handle the Corpse Bride’s eyeball popping out a few times, they will likely enjoy Tim Burton’s Goth gambol between two worlds. Johnny Depp is Victor, the indecisive bridegroom, trying to navigate the chasm between true love and good manners. A film that just might teach kids to commit more decisively to whom and what they adore.

11. Star Wars (Rated PG, ages nine and up). Long ago in a galaxy far, far away, generations of kids have revered this blockbuster George Lucas sci-fi buddy adventure. Though the film can hardly be classified as a horror, there are several scenes with the potential to rattle the psyches of sensitive souls. Consider the trash compactor drama, the alien bar episode and the introduction of one of the most terrifying half-man, half-machine villains of all-time. Try some heavy breathing in advance of the film to prepare the kids for Lord Vader’s entrance, and they will probably do just fine. They will likely even be quoting the movie for days afterward.

12. Ghostbusters (Rated PG, ages 10 and up). Dan Aykroyd, Bill Murray and Harold Ramis are not afraid of ghosts and your kids won’t be either after watching this silly, slimy 1984 comedy caper. A trio of unemployed university professors start their own ghost-busting business and become the guys everyone calls to solve their pesky poltergeist problems. Your kids will be singing the theme song as they pretend to use your vacuum to rid the world of ghosts. Don’t miss this all-in-good-fun opportunity to introduce your kids to Bill Murray and a giant, supernatural Stay Puft Marshmallow Man.

13. Beetlejuice (Rated PG, ages 10 and up). Sometimes ghosts need a little help from their friends. Adam and Barbara are not very good at haunting the home they once owned, which has recently been infiltrated by new owners. So they call in a sketchy mortal-buster named Beetlejuice to get their house exterminated, only to realize too late whose side they would rather be on. Michael Keaton is unforgettable as “the ghost with the most” in this boisterously creepy Tim Burton film.

Family movies to watch with teens:

Author and freelance journalist Christina loves Halloween movie marathons that don’t keep her up at night. Her latest book is The Writer’s Workout from Writer’s Digest Books.