Want a Taste of Western Heritage? 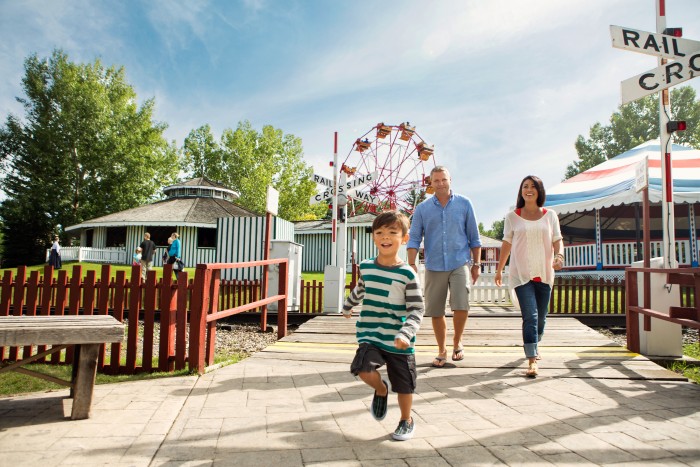 As a teacher, I believe that it's important to help our children experience the history, traditions, and cultural legacies which make Alberta great. If you want to share Alberta's unique and diverse heritage with your kids - minus the crowds, party atmosphere, and expense of the Stampede - we have some great suggestions for daytrips which will help you and your family learn about the fascinating history of the city and province we call home.

Heritage Park is an open-air historical village, and a great place to learn about Calgary's origins. From the first fur traders to the first oil boom of the late 1940s, Heritage Park has a huge variety of activities for all ages. Ride a working steam train, enjoy the historical midway rides, speak to costumed interpreters about the lives of the first European settlers, and discover the rich cultural heritage of the Metis and First Nations groups who live here.

Daily entertainment and special events make this is a great local starting point for any discussion about the history of Calgary and how our city came to be. heritagepark.com

If you're up for a road trip, Foot Whoop-Up near Lethbridge offers a unique opportunity to experience the wild west from the perspective of the "bad guys" - American whisky traders in the 1860s, who came north to trade and sell with the Blackfoot peoples. Their eventual conflicts with the First Nations directly resulted in the North West Mounted Police (the Mounties) coming west, and eventually, the signing of Treaty 7.

Enjoy trick shooting demonstrations, wagon rides, a tour of the historical fort, and First Nations dance demonstrations. Check the website for information on when these special events are available. fortwhoopup.ca

Located about 90 minutes southwest of Calgary, Bar U Ranch is an open-air historical village nestled in the beautiful foothills of the Rocky Mountains. Bar U interpreters demonstrate real ranch skills, such as cattle handling, roping, saddle making and blacksmithing. Guided tours are conducted either on foot or by horse-drawn wagon, or you are free to explore the village and all of its buildings on foot.

While the Calgary Stampede is definitely the largest and most popular stampede and rodeo in Alberta, it is by no means the only one. There are tons of similar events held all over the province during the summer months, some only a few minutes out of town and many just as old and storied as the Calgary Stampede.

These smaller rodeos and stampedes often have their own unique local festivals attached, which are rich with traditions of their own. The Tsuu T'ina Rodeo, for example, is a dry event which features a pow-wow, hand games, and much more. For information about events all over the prairies, visit fcarodeo.com or rodeocanada.com.

About an hour west of Lethbridge, Head-Smashed-In is one of the world's oldest, largest, and best preserved buffalo jumps. The Jump was used continuously for over 6,000 years, making it older than Stonehenge and the Great Pyramids. In 1981, the United Nations Educational Scientific and Cultural Organization (UNESCO) designated Head-Smashed-In Buffalo Jump as a World Heritage Site.

Head-Smashed-In has an incredible interpretive centre and museum with detailed information about the traditional culture, hunting practices, and religion of the Blackfoot peoples, as well as one of the most beautiful walking trails in all of Alberta. It is an essential stop for any Albertan who is interested in the traditions and history of our beautiful province and the human race as a whole. history.alberta.ca/headsmashedin

Blackfoot Crossing was the site of the signing of Treaty 7, making it a significant part of Alberta's history. It is a national Heritage Site, and an important cultural, educational and entertainment centre built for the promotion and preservation of the Siksika Nation's language, culture and traditions.

Blackfoot Crossing has sustained massive flood damage over the last few years, and is currently undergoing an extensive renovation process. The main building is still open for visitors, but most of their outside exhibits and events remain closed. Blackfoot Crossing is the site of the annual World Chicken Dance Championships, which is a colourful and masculine form of dance popular among many plains peoples. Watch their website for updates. blackfootcrossing.ca

The Royal Alberta Museum, located in Edmonton, is a massive facility celebrating Alberta's natural and cultural history. Permanent exhibits include the Natural History Gallery, Syncrude Gallery of Aboriginal Culture, and the Wild Alberta Gallery. This is a beautiful, interactive and well-maintained museum with modern exhibits and thousands of artefacts from across the province. Well worth a visit, if you're planning on a trip to Edmonton this summer! royalalbertamuseum.ca

In many ways, the Ukrainian Cultural Heritage Village is Edmonton's answer to Heritage Park. Unlike Heritage Park, though, the interpreters at the Ukrainian Village are roleplayers, making this a uniquely immersive experience. The Village recreates the lives of early Ukrainian pioneers that settled in east central Alberta from 1892-1930. Step back in time to hear real stories of hardships and triumphs in Canada’s oldest and one-time largest bloc settlement of Ukrainian pioneers.

Fort Calgary is an incredibly significant part of our city's origin story. In the fall of 1875, the North West Mounted Police built the fort and laid the foundation for the city that became Calgary. The Fort is open year-round, unlike Heritage Park, and is easily doable in an afternoon. Highlights include having your picture taken in a Mountie uniform and spending time in jail! fortcalgary.com

Located downstairs in the Chinese Cultural Centre, the museum features an exhibit detailing the lives and history of over 100 years of Chinese settlers in Calgary. Did you know that there were Chinese settlers in Calgary long before most Europeans arrived, and that Calgary's Chinatown is over a hundred years old? Learn about the toils and triumphs of the Chinese community in Alberta at this small, but lovingly maintained museum. culturalcentre.ca

For a complete list of all the incredible sites, events, and exhibitions in Alberta, visit travelalberta.com.

However you choose to celebrate Alberta's history and diverse cultural legacy, this province is full of stories from the thousands of generations of the people who have lived here. Calgary's story is continually being told and re-told, changing and developing, and we should be proud of the city and province we have become. Spend some time this summer and let your kids know why where we live is so special!