Written by The City of Calgary; Photo: Fotolia.com 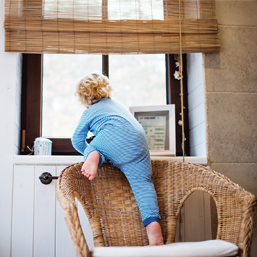 Open windows are a sign of summer-warm weather, a nice breeze. But they can also be an unintended hazard for young children with natural curiosity. That is why The City of Calgary has teamed up with health care practitioners not only to educate Canadians about the risk of open windows, but to change the national building code to make windows safer. “Every year across Canada, over 420 young children are treated in emergency departments because they have fallen out of second-storey windows in their homes,” says Civitarese, The City of Calgary’s chief building official. “At least 50 of those victims are children who receive medical treatment in Alberta, alone.”

This troubling statistic came to the attention of building safety officials in Calgary in 2014, along with the knowledge that most falls were happening in houses, rather than condominiums or apartment buildings. For Civitarese, it quickly became apparent why. “In the building code today, there are different rules for houses than there are for buildings where you have a unit above another unit, like a condo building,” he explains. Currently, the National Building Code has no restrictions on how much a second-storey window in a house can be opened, how far from the finished floor it is, or provisions for adding safety devices to restrict opening a window.

“We felt that as a regulatory body responsible for the safety of buildings, addressing this issue was important and we wanted to make an impactful change,” says Civitarese. In 2014, The City of Calgary began working with the National Research Council, (NRC), which oversees the National Building Code, to address the issue of window safety. Proposing a change to the National Building Code takes time - the document is updated every five years. Proposed changes must go through committee reviews and be accepted by the building industry. It also requires evidence to back up the proposal, which is where Dr. Michelle Simonelli came in.

Simonelli, a paediatrician, became involved in The City of Calgary’s efforts in 2016 through her role as the medical director of the Canadian Hospitals Injury Reporting and Prevention Program at the Alberta Children’s Hospital. According to Simonelli, building code changes could prevent severe injuries to children too young to understand the risks of playing by an unprotected window or pushing against window screens, which are not designed to keep them from falling through. Up to 28 percent of children treated in hospital emergency departments after a window fall need to be admitted due to serious injuries including traumatic brain injuries; skull, cervical spine, facial and long bone fractures; and internal injuries such as splenic or liver lacerations. Of these, traumatic brain injuries are the most common.

“The human cost of traumatic brain injury in a young child is truly impossible to overestimate,” says Simonelli. “These injuries are absolutely devastating for the child, their parents, their siblings, and their communities. It forever changes the lives of those affected.”

The work done by The City of Calgary and Simonelli has resulted in recommendations to ultimately protect children. The proposed changes state that the portion of a second-storey window that is able to open must be at least three feet from the finished floor, or the window must have a device in place to permanently restrict the opening to no more than four inches. Civitarese is optimistic that changes to the National Building Code will be approved and adopted in December 2020.

The City of Calgary is urging you to consider the windows in your home as part of the child-safety efforts. For windows on the second or third storey with low sill heights, you can:

Each year across Canada, over 420 children are treated in emergency departments because they have fallen from their home’s windows. Learn what The City of Calgary is doing to make your home safer and the steps you can take to protect your family by visiting calgary.ca/windowsafety and windowandbalconysafety.ca.