Strange (but Normal!) Things Babies Do 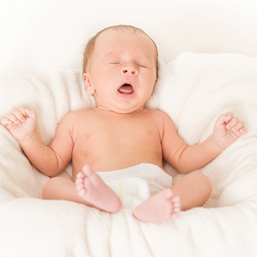 At some point, every new parent wonders: ‘Is my baby supposed to do that? Is this normal?’ Morgan Shandler recalls several moments of new mama anxiety during the first few weeks home with her daughter Violet, who is now a busy one-year- old. “One thing that particularly freaked me out was when Violet would bob her head when attempting to nurse. It almost looked like she was having a seizure or like she was a broken-down robot,” says Shandler. “But my paediatrician assured me it was a completely normal part of ‘rooting’ for the breast.”

Startle reflex. Parents also worry about seizures when their infant suddenly throws out their arms and legs as if they’re falling. Paediatrician Jennifer Mellick, MD, FAAP, says the startle or Moro Reflex is a normal neurological infantile reflex that disappears as the nervous system matures. “If you believe in evolution, there’s probably some reason why mammals and homo sapiens have this instinctual need to grasp, and if they’re falling, reach out to find something and grab on. Babies do that same kind of thing. If they feel like they are falling, they are going to throw their arms and legs out wide to find their caregiver and grab,” says Dr. Mellick.

If you’re ever concerned about strange movements your baby makes, try to video record it, suggests Jennifer McBride, MD, internal medicine and paediatric specialist. “9 times out of 10, baby won’t do the motion when in the office with us. If parents record it, I can see what the baby looks like when they are doing that movement and either reassure them or decide if we need to do something else,” says Dr. McBride.

Funny breathing. Babies have breathing patterns that alarm many newbie parents. Physicians call it ‘periodic breathing of the newborn’ - and it’s completely normal. “They will almost pant for a period of time and then they will pause for several seconds - several seconds in baby breathing seems like a really, really long time. Then, they take a deep breath, let out a deep sigh, and they pant again,” explains Dr. Mellick.

Babies also often make lots of “gurgly, snorty sounds,” says Michael Greenfield, MD, internal medicine and paediatric specialist. “This is pretty normal because babies have to breathe through their nose when they’re eating, and a lot of babies have congestion, so it will make their breathing sound much worse than it really is,” says Dr. Greenfield.

Bless you! Just as babies make funny sounds when they breathe, they often sneeze, which leads parents to wonder if their child suffers from allergies or is getting sick. “That’s just how the baby clears out his nose because they can’t blow their nose like we can,” says Dr. McBride.

Hiccups. Just like the rest of us, babies experience hiccups, which are sudden contractions of the diaphragm. Often, a baby can get hiccups after a feeding. “Babies will hiccup for hours on end, which doesn’t bother them at all,” says Dr. Greenfield.

Scaly scalp. Cradle cap, which is a greasy, yellowish, scaly rash on the head, may not look cute, but it’s usually nothing to worry about. Try brushing your baby’s hair or head once a day with a soft baby brush, which will help loosen the natural oils on the scalp to avoid buildup. Moisturizers, like baby oil, mineral oil, or coconut oil can also help. “If it seems to be getting worse or looking really red, that would be a time to see the paediatrician. It could be a sign that baby is going to have eczema, which typically runs in families,” advises Dr. McBride.

Strange colored poop. Depending on whether your baby is breast-fed or formula-fed, the color of their poo can range from green and yellow to brown. Breast-fed babies will have more color variations since breast milk is comprised of mom’s diet. “I get worried if the poop is a grey color or lacking in the brown or green tones or if there is blood or red in the diaper,” says Dr. McBride.

Difficulty pooping. Your baby may appear to struggle when they go, but as long as their poop is soft and doesn’t look like pellets or rocks (a sign of constipation), don’t worry. Babies can have dirty diapers anywhere from once a day to every few days. “Formula-fed babies don’t necessarily poop every day and sometimes that concerns parents, but the body doesn’t process formula as fast as it does breast milk,” explains Dr. McBride. If your little one is passing watery diarrhea, contact your doctor as this can be a sign of an infection.

Jeepers, creepers... It may look weird, but babies sometimes sleep with their eyes half-open or appear as if their eyes are rolling around in their head. “I don't know that anyone knows why eyes roll around the head. It’s probably something to do with their sleep patterns. They don’t have well-organized R.E.M. sleep at that age,” says Dr. Mellick.

Occasionally, it may appear that your baby’s eyes are crossing, which is normal up to 18 months of age. If your baby’s eyes seem persistently crossed or turned in or out, however, talk with your physician.

More zzz’s... pretty please? Among the most popular questions paediatricians field from tired parents has to do with sleep and when everyone in the family can get more of it. “Sleep is the Holy Grail of parenthood,” says Dr. Mellick. Babies generally don’t sleep for long periods of time because they need to eat every few hours. Their tiny tummies can only hold so much milk. “As they get older, they still need to eat frequently because they need a large volume to get the calories they need to grow,” says Dr. Mellick. By about six months, your baby should be sleeping for a seven- to eight-hour stretch.

Wait, they changed. What is normal today probably won’t last since babies grow and change rapidly, but always consult your family physician with any concerns. “We’d rather you call with a question that isn’t really something to be alarmed about than miss something that is,” says Dr. Mellick.

Freelance journalist Christa and her husband are the parents of two adolescent sons, who still do strange things! Christa is the author of Happy, Healthy & Hyperconnected: Raise a Thoughtful Communicator in a Digital World.