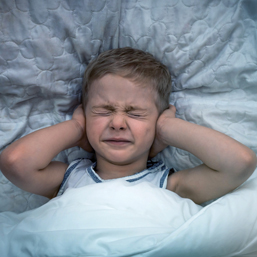 It’s a scene that rattles new parents and frustrates seasoned ones: In the middle of the night, your child screams from their bedroom, startling you awake as you scramble to their room and find your child sobbing and scared because they had a nightmare. Nightmares can wreak havoc on your household’s ability to get restful sleep and can lead to your child resisting bedtime unless it’s in bed with you - with the lights on.

While you can’t prevent nightmares from occurring, you can take steps to better comfort your child after nightmares and establish a bedtime routine that experts believe reduce the frequency of nightmares.

A nightmare is a frightening dream involving an imagined danger that often causes children to wake up feeling afraid and needing comfort. Although children as young as toddlers can have nightmares, experts say that, generally, nightmares start between the ages of three and six, are common in children, and tend to decrease after the age of 10.

Typically, nightmares occur after the child has been asleep for several hours and is in the Rapid Eye Movement (REM) stage of sleep. During the REM stage, the brain is especially active with processing vivid images and new information for learning and memory. When a child wakes up from a nightmare during the REM stage, the bad dream’s alarming images are still fresh and can seem real to the child.

Nightmares are different from night terrors, which are more serious but less common events. Unlike nightmares, night terrors occur during the first few hours of sleep and cause children to thrash about while still asleep. Night terrors also differ from nightmares in that it is difficult to awaken a child from a night terror and, once awake, the child exhibits little to no recollection of the episode that caused the terror.

The little research that has been done on children’s nightmares has not uncovered the exact cause of nightmares. In fact, nightmares can occur despite having no discernible source.

However, experts advise that certain factors may increase a child’s risk of nightmares, notably:

Experts note that a nightmare’s theme often reflects the child’s developmental stage. For example, toddlers may have nightmares concerning separation anxiety; young children may have nightmares stemming from their increasing responsibilities at home or at school; and older children’s nightmares may replay scenes from a scary movie they just saw or suspenseful book they just read.

Tips to comfort your child after a nightmare

Experts encourage parents to do the following to soothe a frightened child after a nightmare:

Reassure and comfort your child immediately. Children who wake up scared from a nightmare need to know right away that they are safe. Reassure your child that they’re secure and that the nightmare wasn’t real. Physical contact, such as hugging or rubbing your child’s back after a nightmare, can also help reduce their anxiety, as can sitting with your child in their bedroom until they’re calm enough to fall back asleep.

Conquer the darkness with light or a lovey. Dash your child’s nighttime fright by turning on a nightlight or installing a dimmer switch in their bedroom. Give your child a favorite teddy bear or blanket to hold to help them settle down and return to sleep.

Don’t further your child’s belief in imaginary beings. If your child is jittery about ‘monsters in the closet’ after a nightmare, open their closet door, if your child insists. However, resist telling your child to use a magic wand or lightsaber, for example, to make the imaginary creature disappear. While such monster- slaying tactics may provide temporary relief, these tactics also confirm that the monster exists and, thus, may exacerbate their anxiety in the long-run.

Give children a sense of control over their nightmares. To help lessen nightmare distress, read your child stories in which a character overcomes their fear of nightmares. You can also defuse the terrifying aspect of a nightmare by drawing a picture of the scary image, tearing it up, and throwing it away.

Use positive images to replace foreboding ones. Another way to untangle a nightmare from your child’s thoughts is to have your child focus on positive images. Replace disconcerting images by reminding your child of a happy memory or an exciting event to come.

Tips to help reduce the frequency of nightmares

We can’t completely prevent nightmares. However, we can facilitate restful sleep which, in turn, may help decrease the incidence of nightmares.

Specifically, experts suggest taking the following steps to create a bedtime atmosphere of comfort and security for your child:

Establish a routine that helps children wind down before bed. This can include reading a pleasant bedtime story together, singing soothing lullabies, or giving your child a relaxing bath.

Keep your child’s room free of any objects that interfere with sleep. Encourage peaceful slumber with a cozy pillow and blanket, a favorite stuffed animal, and a nightlight. An older child may find comfort in a dreamcatcher being hung above their bed and learning the belief behind the sleep-aid.

Discuss nightmares during the daytime. Depending on the age of your child, shining some daylight on a nightmare’s theme may help identify the stressors behind the nightmare. Once pinpointed, guide your child on how to overcome those stressors and, hopefully, experience fewer nightmares.

Set the scene for sweeter dreams by making your child’s bedtime a tranquil experience. Your child will get a better night’s sleep and, as a bonus, so will you.

Dolores is a mother of three who draws inspiration for her writing from everyday life. Her work has been featured in numerous print and online publications. Follow more of her work @LolaWordSmyth.