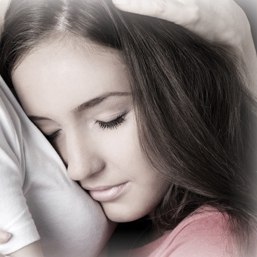 "Get her some ice cream!” If I had a dollar for how many times I heard that advice after my daughter’s devastating breakup, I could buy out the whole grocery store freezer department. Newsflash: Ice cream doesn’t always cut it. In fact, it is possible that ice cream is never the answer to a teen’s broken heart.

My daughter fell in love with her best friend at the age of 16. Their relationship was intense. They brought out the best and the worst in each other. It ended ugly. Months later, they still aren’t able to talk to each other because the hurt is so raw. My daughter lost a boyfriend, but she also lost her dearest friend and favorite person.

After the breakup, my daughter didn’t eat. She didn’t sleep. Showering took a huge effort that she couldn’t muster up for days at a time. All she did was cry. My whole household was in turmoil. I took her to therapists and psychiatrists. She ended up in the ER because dehydration and exhaustion triggered a migraine that wouldn’t let up. My whole family was barely holding on because her pain swallowed up everything around her.

Still, people prescribed ice cream for the breakup. A few suggested we watch Gilmore Girls while feasting on pints of the creamy goodness. I love the characters of Rory and Lorelai from the show, but I knew they weren’t able to fix this problem. This was well beyond the power of Phish Food Ice Cream, too.

It’s been six months after the breakup and my daughter is slowly working through the grief. I don’t have all of the answers for her or a magical cure for taking away your child’s heartbreak after a breakup - oh, how I wish I did - but here are 10 things I’ve learned along the way:

1. People don’t know what to say, so they rely on standard responses like, “Get [her] some ice cream.” But this doesn’t necessarily mean they don’t care about the situation.

2. Most people don’t take teenage relationships seriously; thus, the flippant remarks about ice cream. This relationship and this breakup were serious to my daughter.

3. Sometimes parents aren’t enough support. My daughter’s therapist said it’s a good idea to seek professional help if a teen isn’t moving on from a breakup or a lost friendship after two weeks.

4. Time isn’t the cure; deciding it is time to move on is the cure. Someone can stay stuck in their pain for years if they don’t decide that they’ve had enough of the pain or grief.

5. You can’t make your child decide that they’ve had enough of the pain or grief; they have to come to this conclusion on their own.

7. But space can be hard. My daughter knew that staying away from her ex-boyfriend’s social media and avoiding him at school was the best thing for her, but the pull to someone you miss so very much is hard to resist.

8. A hurting person doesn’t always feel like engaging in new experiences or seeking out new friends. Grief is exhausting; it often doesn’t leave room for anything else.

9. Make sure your teen doesn’t feel like a burden to you. They need to know you’ll still be there, even if all of their friends get tired of hearing about the breakup.

10. You might miss their ex, too. My daughter’s ex-boyfriend was a part of our household for a year. It was a loss for me, as well. However, it’s important not to upstage your child’s breakup with your feelings.

Things to say to a teenager experiencing a heartbreak instead of, “Want some ice cream?”:

Teenagers have big strong feelings, and they don’t always completely understand them. They might not have the words to express them to someone else. Things get turned upside down quickly and sometimes it’s hard for their emotions to find their way to the surface. Be there to help them pull through. Don’t trivialize their feelings by saying all they need is some Ben & Jerry’s. Listen. Acknowledge. Support. By all means, dig into some ice cream together if you both have a craving, just don’t call it the cure (unless you know of magic ice cream and if so, I would like to place a large order!).

Rachael is a mom, writer, and educator. Find her at ramblingrach.com.