Are You Ready for... 'The Talk'? Ways to Start the Sex Conversation with Your Kids and Keep it Going 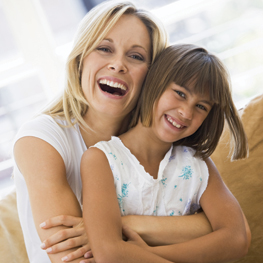 Maybe your mother subtly left a pamphlet by your bed. Or your dad awkwardly coughed through an explanation of hormones. The information seemed too horrifying and embarrassing to ever discuss with your, ugh, parents.

As much as we like to think that we are far more enlightened and progressive today, the reality is that it’s still uncomfortable to talk to your kids about puberty and body changes, much less sex. Children today are exposed to more graphic sexual images and innuendos at a much younger age, making it more important than ever that they learn the facts correctly. Research overwhelmingly shows that, despite their vehement eye-rolling, kids want and need that information to come from their parents.

But what is the best way to broach the topic? What age?

Kathleen Burke, who has worked in the health and education fields for more than 20 years, says that there is no one ideal age to start talking; it varies from child to child and even neighborhood to neighborhood. “Ideally, parents should be having an ongoing conversation with their kids and getting comfortable using the correct anatomical names while their children are still infants,” she says. “This makes those words less taboo.”

While some girls reach puberty as early as eight and some boys at nine, it’s generally a good idea to teach kids by age 11 what changes are going to occur in their bodies.

Rather than bracing yourself for “The Big Talk” or holding up one of those awkward picture books of pollinating flowers subtly followed by two people lying in bed under the covers, they recommend looking for teachable moments throughout childhood.

“It doesn’t have to start in a big dramatic way,” says Andy Wentling, a health educator and former teacher. “Look for opportunities. During a football game on TV, if you see a deodorant commercial, that’s a teachable moment about body odor and how hormones are changing.”

After you’ve started the conversation, keep it going when the opportunity arises. Follow up with any provocative situations in TV shows, movies or songs and ask questions about their friends’ behaviors. These talks don’t have to have a formal, face-to-face structure. It’s often easier to share when you’re doing another activity, such as driving, walking the dog, shopping or raking leaves.

That said, sometimes having a little framework can really help. Sarah Hoban, mother of an 11-year-old daughter, found it easier to have the conversation once she knew her daughter was going to be presented with the information at school. “I wouldn’t have thought school would be a good setting, but it really provided a nice framework and gave me something to start with.”

It’s okay to be embarrassed and acknowledge that it’s an awkward topic. Admitting that you feel uncomfortable can even lighten the tension.

Give kids the information in a straightforward manner with correct terminology. Use a matter-of-fact tone and just convey the facts that they need, a little bit at a time. That is, don’t lay it all on them at once. Separate the puberty talk from the sex talk.

“Sometimes parents start rambling,” says Wentling. “It’s very natural. But kids need a little time to process information.”
For Beth Thomas, who has a son and a daughter, this meant reminding her sixth grade daughter about what she learned a year earlier before she delved into the talk about how babies are made. “I told her a little about what happens with boys and then after her field trip, we talked more and I was able to prompt her with some questions.”

And this, Wentling agrees, is an excellent strategy. If they come to you with questions, answer them and follow up with more questions, “Why do you want to know?” or, “What have you heard?” This will help give you an idea of what your child knows - or thinks they know. Don’t worry if you don’t have all the answers or your child comes to you with a complex moral question. It’s okay to tell them that you’ll find out more and report back.

It’s also helpful to clear up misconceptions that arise. After hearing the reproductive talk, Thomas’s daughter later heard girls talking at the lunch table about ways to not get pregnant. When her mother asked her what she learned from that discussion, they were able to sort out the truth from the rumors.

Wentling reminds parents that just because kids are asking, it doesn’t mean they’re doing anything. Kids today are exposed to terms from French kissing to oral sex and often just don’t know what something means. Likewise, don’t assume that by answering the question, they’re going to engage in the activity. This is the perfect opportunity to insert your family’s moral values.

Once you’re comfortable and the original uneasiness has subsided, continue to spend time talking about the emotional implications of a sexual relationship as well as the responsibilities and consequences of sex.

Hands down, the most important step is to just communicate and be available. “Recognize that the challenging part is just starting the conversation,” says Burke. “There are points in life as they develop when you want them to be able to come to you.”

By starting gradually and touching base frequently, most parents find that while they may not ever be entirely comfortable talking about the topic, they can at least speak clearly and rationally.


Laura is a freelance writer and mother to four children. She’s taking a deep breath and preparing for her next “talk.”