Good Secrets or Bad Secrets: Do Your Children Know the Difference? 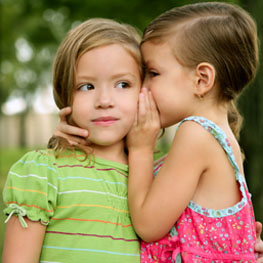 In the world of child abuse prevention, talking about secrets is very important. Children often tell secrets to friends or siblings and the secrets are often harmless. But sometimes secrets can be dangerous or hurtful to others. Helping children differentiate between ‘okay’ and ‘not okay’ secrets is useful, but others suggest not doing secrets at all. So what’s the big deal?

Secrecy is the foundation of child sexual abuse. It may sound cliché, but the phrase, “This is our little secret” and those of the like are manipulative tactics often used by people who sexually abuse children. Children aim to please adults and to avoid doing things they think will get them into trouble. If a child has experienced keeping secrets (especially from trusted people), and places value in keeping secrets, then they may be more easily convinced to keep a ‘not okay’ secret.

Secrets often imply something negative. Not always, but secrets are often linked to deception and keeping hurtful or dangerous things quiet. ‘Surprises,’ on the other hand, are generally positive and will be revealed eventually. It’s okay for children to keep surprises about parties and presents because those will make someone happy and won’t be a secret forever. Children should be reminded not to keep secrets about bullying, fighting, illegal/dangerous activity and inappropriate touching.

An adult shouldn’t ask a child to keep a secret - any secret. For some children, even a fun secret can feel like a ‘burden’ to keep. They may feel immense pressure and/or anxiety to keep the secret, but depending on their age and personality, may have difficulty doing so. This violates their emotional boundaries and can lead to feelings of guilt and/or shame if they were to disclose the secret.

It may be difficult for children to decide whether or not to keep a secret. The potential consequences may not be noticeably negative or positive, the child may not want to get in trouble and they may not want to violate someone’s trust. Fostering children’s assertiveness, decision-making skills and confidence can play a role in a child’s ability to determine the appropriateness of secrets. In order to minimize any confusion, many parents take a ‘no secrets’ policy approach.

Regardless of how parents choose to approach the concept of secrets, there are ways to help children begin to think critically and make safe choices. Initiating the conversation with your children is the first step. Parents can also help children practice making the right decisions by role-playing different ‘secret’ scenarios. Brainstorm possible secrets and ask children which ones they would keep, and which they would tell to an adult. Have them decide which adult they would tell, and what they would do if the first adult they tell doesn’t help.

Here are other ways to help children make positive decisions about secrets:

•  Teach children to trust their instincts. If they think something may be wrong or the secret may hurt someone, do something.

•  Remind your children that no one, not even someone they know well, has the right to touch them in a way that makes them feel uncomfortable.

•  Make sure they know that nobody has the right to ask them to keep a secret from their parents.

• Tell them that no adult should ever ask them to keep a ‘special secret,’ especially one that makes them feel uncomfortable.

• Tell children to keep telling trusted adults if the first one they tell doesn’t help.

• Let children know that they can tell you anything and you’ll believe them, and they won’t get in trouble for telling you.

Katie is a Child & Family Therapist and Educational Consultant at Birds Bees & Beyond. For more information about upcoming seminars, head to www.birdsbeesandbeyond.net.