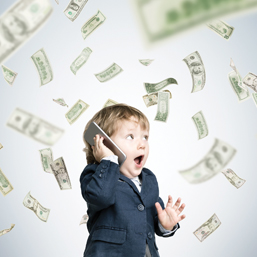 Five years ago, Dan Viall introduced woodworking to his daughter Livia, now 10, with the intention of spending time with his youngster. Not long after, a family friend stopped by and was so impressed with one of Livia’s creations, he asked to purchase it as a gift for his wife. Excited by the idea of marketing her wares, Livia began peddling her woodwork under the name “Crafty Girl Creations” to family and friends, and on her mom’s personal Facebook page. As demand grew, her mom helped her set up a public business page on Facebook. She also sells her home décor items on Etsy and holiday marts. What can kids learn from owning their own businesses? Parents of young entrepreneurs say they not only earn extra cash, they gain a host of valuable life skills, too.

1. Self-confidence. Whether they conduct business in person, over the phone, or online, kids learn how to talk to customers, politely confirm orders via email, or make eye contact while responding to an adult’s question. “Some of that is becoming a lost art, which is sad. Sometimes they get nervous, but we coach them about what the conversation might look like and we practice,” says Kristin Viall, mom to Livia, and Brooklyn, seven, who shares her sister’s entrepreneurial spirit. With each conversation, kids slowly grow more self-confident and poised.

2. Curiosity. Owning a business can help a child explore a passion while also fulfilling a need. “Brooklyn has been gifted this amazing heart for animals,” says Viall. Although the Vialls weren’t interested in adding a dog to their family, they didn’t want to quash her passion either. Brooklyn turned her love for animals into a pet care enterprise called “Blue Doggy Dog Walking.” Not only does her business allow her to interact with animals, she also provides a needed service for neighbors, who sometimes struggle to get home from work in time to let their dogs outside or seek a pet-sitter when they travel.

3. Problem-solving. Kyler Russell, 13, loves baseball, but early on in his youth baseball career, he resisted wearing an athletic cup because the only ones available were “hard, bulky, and uncomfortable.” Many of his friends complained about wearing theirs, too. Since his coach required all of his athletes to wear a protective cup during practices and games, Kyler’s parents encouraged their then eight-year-old to come up with a way to address the issue. With help from his mom, a few craft supplies, and her sewing machine, they began developing a prototype. After testing and fine-tuning the product, the “Comfy Cup” was born.

4. Persistence. Inventing a product, of course, takes patience and tenacity. With persistence comes resilience as kids work to promote their business, overcome failures, and manage disappointment. “The evolution of Kyler’s idea into a marketable product happened over the course of two years,” says Brandi Russell, Kyler’s mom and co-CEO. “There were at least 10 prototypes before Kyler landed on the Comfy Cup you see on Amazon today.”

5. Teamwork. Like many families whose kids are involved in an entrepreneurial effort, Kyler’s whole family is involved in making the business a success.

“The synergy of working together is a valuable lesson in business and in life. In our family, we all support each other and ask for help when we need it,” says Russell. Even Kyler’s younger sister Ellie, 10, is an employee of the company, filling orders for shipment before school.

6. Commitment. Maddox Weber, 11, had to think fast after making a “poor choice at home which led to a $600 repair,” says his mom April Weber. To reimburse his parents, the shrewd junior high schooler decided to channel his love for animals into a poop-scooping business he named “Scoop Squad.” April Weber, a graphic designer, helped him create professional-looking flyers, which Maddox distributed around their neighborhood.

He also advertised his business on the neighborhood Facebook page. Maddox has since paid off his debt to his parents and has benefited in other ways, too. “The number one lesson Maddox has learned is that having a job is not about what he feels like doing at that moment. It has taught him to do what needs to be done first, and then there is time for play,” says April Weber.

7. Leadership. Running a business gives kids a chance to explore different ideas and learn to organize and manage their time. If your child wants to start a business, allow them to take the lead each step of the way, beginning with brainstorming what steps would be necessary to launch it. “Be careful not to take over the experience or do the job for your child. He needs to know that he can do this on his own,” says April Weber. If you end up doing too much of the heavy lifting, encourage your child to take a break from their business for a while to follow other interests.

8. Financial management. Viall says that running a business has introduced her daughters to online banking and money management. They are able to log into their accounts on their iPads, endorse cheques, make deposits, and collect fees for their products and services through a Square app. They are also learning about sales taxes and creating budgets around how much they plan to save, donate, and spend.

9. Community engagement. Coming up with creative products and finding fun ways to serve others isn’t just a business model for the Viall family, these values are intertwined in their personal faith and parenting philosophy. Their kids’ entrepreneurial spirit “has been a great, practical way to fulfill our family values, which for us are: Love God, serve others, be generous, do our best, and have fun,” says Viall.

Most recently, Brooklyn gave back to her community by creating a “Dog Fest” for her neighborhood dogs. She invited the neighbors to bring their dogs and try an obstacle course that she created. She also raffled off a dog toy, offered dog treats for the dogs and lemonade for the owners, and gave away free dog walks to owners who completed a crossword puzzle. “It was so fun and such a hit - all created and funded by Brooklyn,” says Viall. “We just helped her implement her ideas.”

Christa is an award-winning freelance journalist. Her entrepreneurial spirit took hold at the tender age of six when she tried selling a few rocks that she painted. By age 12, she discovered a stronger demand for her pet-sitting and babysitting endeavors.