How to Build Your Village 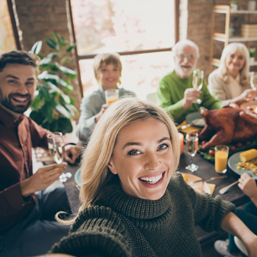 Feeling like you are the only person who is awake in the world as you pace the floor all night with a sick baby in your arms? Hiding in your dark pantry to cry alone after yelling at your kids because they’ve been bickering at each other for hours? Feeling completely defeated and inadequate because your toddler violently refuses to eat every meal you’ve put in front of them? Wondering if you are the only one who has to repeat themselves 3,457 times to get your teenager to complete one simple task?

In all of this uncertainty, one thing is for sure: parenting can be isolating. It’s ironic that bringing tiny people into the world whom you love more than anything can make you feel more alone than you have ever felt before. Dr. Soraya Lakhani, registered psychologist and director of Yellow Kite Child Psychology, says parenting can feel isolating for a number of reasons. “As parents carve out time to raise their children, they have to redistribute time and energy from other parts of their lives,” she says. “This redistribution can result in parents having to suspend some of their own needs, including spending time with existing friends, making new friends, and engaging in activities that might bring them a sense of happiness, relaxation, and connectedness.”

“When people are overwhelmed and need support but feel a sense of shame in asking for help, that can lead to a sense of isolation. All parents struggle, yet many parents go through that experience feeling utterly alone, which is really quite heartbreaking,” she says. If you are in a relationship, you can always talk to your significant other, but chances are they are just as lost as you are. Your circle of friends can be a great resource but the fact that people are having children later in life may mean you are either the first or last person in your group to have kids. Your parents have been in your shoes before but that was decades ago, and life has changed so much since then. You can’t bother your doctor with every little question either. When you are faced with a parenting dilemma that you don’t know how to solve (something that often happens multiple times a day), it is difficult to know whom to reach out to.

It takes a village

As cliché as it sounds, there is a reason the African proverb, “It takes a village to raise a child,” is so common - it’s true. Chelsea Flemons found this out the hard way when she moved from Calgary to Fort McMurray for her husband’s job just over a year ago. The mother of two girls, ages five and two, says she didn’t know anyone in her new city and she felt terrified, lonely, and sad at the prospect of moving somewhere with no support system. “But I had my girls and we were able to get out there and meet people together,” she adds. “It’s really amazing how quickly it happens if you just put yourself out there a bit. I am the type of person that needs to get out and do things, so I knew if I didn’t make the effort, those negative feelings wouldn’t change.”

It’s healthy for parents to be reminded that nobody has all of the answers and it is okay to feel lost and need support. “Having connections with other people in similar contexts can provide a sense of community,” says Lakhani. “At the very least, it helps parents recognize that they aren’t alone. And, of course, it can be a valuable forum for parents to exchange ideas, obtain resources, and discuss avenues they can pursue if they need support.”

You might be thinking, ‘That’s all well and good, but how exactly do I do that?’ Finding your parenting pack can be difficult and even awkward. It’s often compared to dating in that when you meet a new parent, you need to get to know them to learn if they are ‘your people’ - if you share the same interests, values, parenting styles, etc. “As with all relationships, when breaking the ice, be open to making the first move when initiating conversation with another parent,” advises Lakhani. “Compliments are great, as are questions. For example: ‘I love your kid’s XYZ’ and, ‘Where did you get your child’s XYZ?’ The parenting experience can be hugely varied, but there are a lot of universals as well, and talking to another person who understands the joys and challenges of parenting already offers tremendous common ground.”

Finding other parents to connect with can be especially challenging for dads as there are many well- advertised mom groups designed to bring women together to chat about their kids but not as many for fathers. “Being a stay-at-home dad is absolutely isolating,” says Michael Radziwon, a father of three girls, ages 11 and two six-year-old twins. “When there is a group of moms at school pick-up, I’m often ignored. I feel like my opinion is not needed or wanted.”

He adds that he has received the same treatment when bringing his children to doctor’s appointments or parent/teacher interviews. “They seem to look right through me and talk to my wife, like I wouldn’t know the answers,” he says. “I’m the one who’s there every day. A parent is a parent, it doesn’t matter if they are male or female.” He says connecting with other parents is made even harder by the fact that it can be awkward for a man to ask a mother for her phone number to connect for a kids’ play date. “There shouldn’t be that stigma, we need to grow more as a society,” he adds.

Lakhani says it is harder for dads since many parent- child activities are still catered toward and attended by mothers, especially in the months immediately after birth. “We tend to pursue relationships with people we perceive to be similar to us,” she says. “Two moms might feel like there’s a more natural connection than a mom and dad. I’d still encourage dads to try out the strategies I mentioned. Hopefully there are more opportunities for dads to connect, especially as kids approach school-age.”

As in Flemons’ case, many people turn to social media to create parenting connections. “My very first step to making these connections was joining ‘The Mommy Network’ on Facebook in Fort McMurray,” she says. “I simply posted that I am new here. I just moved from Calgary. I have two girls, ages four and 10 months” - at the time - “and would love to meet some new friends!” The response was overwhelming. I had moms asking to meet up for play dates all over the place. So that’s what we did! With some of them, we connected instantly and have become very close since. I would consider them some of my best friends.”

Technology has kept up with this trend of moms turning to their phones and computers to connect. Mush and Peanut are two relatively new apps that are designed to be the ‘Tinder for moms’ to help lonely female parents connect with matches who live nearby. Peanut advertises as “the social network for women to connect across fertility and motherhood, build friendships, find support, and learn from one another,” while Mush is marketed as “the friendliest app for mums.”

Lakhani says the advances in technology meant to bring people together are great and any sort of social connection, no matter how it is fostered, is better than no connection. “Parents know themselves best and can approach forming connections in the way that works best for them,” she says. “Parents should set themselves up for success and make formulating connections as easy as possible, in whatever way feels most natural and rewarding for them.”

Radziwon says he has tried using Facebook groups to connect with other dads but has never found the right fit. He has built some relationships through an organization called Ups & Downs Calgary that provides support for individuals with Down syndrome and their parents. “My eldest daughter has Down syndrome and Ups & Downs has really helped us with support and activities for her as well as connecting us to parents going through the same things as we are,” he says.

“We’ve created a tight group of friends and we spend time together and learn from each other.”

If creating connections through social media and apps isn’t your thing, there is no shortage of organized face-to-face options. Activities include programs offered at local libraries, yoga, swimming lessons, music classes, gymnastics, dance classes, etc. More organic connections can be made at the playground, while picking your child up from school, at local indoor play places and other outings where you might run into another parent with similar interests who lives near you.

No matter how you find them, building parenting connections couldn’t be more important.

“Feeling alone, overwhelmed, and isolated can take a significant toll on a parent’s physical, emotional, and mental health,” says Lakhani. “It can result in parents feeling burnt out and like they don’t have the bandwidth to live life the way they want to. When parents are burnt out, it can impact their capacity to connect with their children and spouse. A lack of social connectedness can really reinforce the sense of being completely and utterly alone in navigating the parenting journey, and that can leave parents feeling taxed and exhausted, and with nowhere to go to unload or recharge.”

Lakhani adds it is important to remember that not all connections are going to work out and that’s perfectly fine. “In truth, by the time we reach adulthood and have kids, many of us are out of practice with making new friends - we haven’t had to do it in a very long time. So, it’s healthy to remember that we might get brushed off or shut down or have connections fizzle out, and that can be discouraging, but it’s also a normal part of seeking out meaningful friendships. It won’t always be a smashing success and just because someone doesn’t want to be close friends doesn't mean there’s something wrong with us or that we’re ridiculous for trying,” she says.

Stacie is a freelance writer and editor and mother of a delightful daughter, five, and silly son, two.