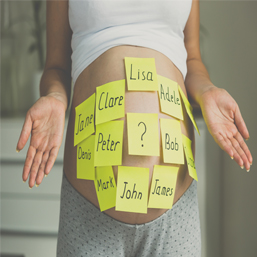 With the debate that erupts around naming babies, expectant parents may wonder: How much should popular trends and others’ opinions influence our decision? How should we manage negative feedback for the name we choose?

Laura Wattenberg, author of The Baby Name Wizard, says parents should consider their objectives when choosing a name. You might select a name to honor a friend or family member or because it sings to your heart, regardless of current trends. “On the other hand, if you see a name as a child’s calling card that will represent them to the broader world, you have to be willing to step outside of your personal taste and try to see it from other perspectives,” suggests Wattenberg.

How will the name you bequeath impact your child down the road?

“It wouldn’t be fair to your child to choose a name that all of their future friends and family absolutely loathe,” says Wattenberg. Although you rely on your friends and family for their honesty, advice, and perspective, you get to make the final decision and you may not be able to please everyone.

Keep your cool. If you hear negative feedback, stay calm and avoid getting defensive. “Explain the history, the meaning to you, the love you have for a certain name,” says Sharon O’Neill, a marriage and family psychotherapist and author of A Short Guide to a Happy Marriage. “Then nicely explain that you understand that others may not see it as you do, but you ask that everyone be supportive. Anything less would never be good for any child to eventually feel.”

Consider concessions. Sue LeBreton says she made the mistake of sharing the girl’s name she and her husband were considering with her mother-in-law. “I loved the name Charlotte,” says LeBreton. But her mother-in-law clearly did not. The couple chose a different girl’s name on the list, naming their daughter Abigail. “What amuses me is today, Charlotte is one of my daughter’s favorite names for dolls!” says LeBreton.

Discuss conflicting cultural beliefs. Clashing cultural traditions can also fuel conflict when it comes to naming a baby. Madonna Chien says that her husband wanted to name their son after his father. “My mother disapproved because per Chinese tradition, it’s considered insulting to name your child after a family member. However, we explained to my mother that my Chinese father-in-law understood the intent and was okay with it,” she says.

Suggest nicknames. Try appeasing a disappointed family member by offering an olive branch in the form of a nickname. “Grandparents or an aunt or other family members may have a nickname that they use in their special relationship with your child,” says O’Neill.

Give it time. Stacy Weiland also met resistance from her mother when she decided on her son’s name, Andrew. “My mother wanted me to name him after my grandmother and grandfather. But I didn’t like the names very much, so I didn’t want to name my child after them. My mother wouldn’t refer to my son by his name for about a month,” says Weiland.

Weiland gave her mother time to come around to her son’s name and advises other parents to do the same. “This is your child. You are going through a lot of big changes and sleepless nights. No one has a right to demand a particular name and give you more stress,” she says.

Politely ignore. What do you do about strangers who disparage your child’s name? Lisa Cash-Hanson and her husband chose the name Matilda for their daughter because they felt it was unique. “It was something in my heart that she would be named Matilda and it stuck,” says Hanson, author and business coach.

She was surprised when her daughter’s name didn’t ring well with others. Friends, family, and even strangers made faces and said, “That’s too old-fashioned” or, “She is going to get picked on in school” and worse, “That name is ugly.”

“We’re seeing an epidemic of bad baby-name manners,” says Wattenberg. “As names become more diverse and creative, there’s less agreement on what makes a good name. If someone is flat-out rude, chilly politeness and a change of subject is the best move.”

Hello! My name is____. Many parents say the best strategy they’ve found to manage feedback is to say nothing or plead indecision and announce the baby’s name after the birth. At that point, the focus will be on your adorable baby, and their name may seem less up for debate.

Freelance writer Christa is the mom of two boys with perfectly suited names as far as she’s concerned. She is the author of Confidently Connected: A Mom’s Guide to a Satisfying Social Life.